What does the word 「なりたかねえ」 mean?

It is said by a boy who was straddling on a running pig among other of them.

I think it would mean 「なりたくない」 or 'not to become'. Is it changed because of dialectal speaking?

The former is an informal and mostly-masculine way of saying the latter (dictionary form) around Tokyo. One might safely call it the "tough guy speech". Guys just talk like that around Tokyo when they hang around with close friends.

Calling this kind of speech old or outdated is sheer nonsense. It is 100% current. I have lived in central Tokyo over 25 years, so I know it is current and real.

The ない-to-ねえ change in Kanto is "famous" even among Japanese-learners these days (and it has been explained many times right here on SE) so that should require no explanation.

Thus, 「なりたかねえ」 means "to not want to become" just as 「なりたくはない」 does.

in the "dictionary" form, would be:

Either way, the sentence literally means:

"Those who don't want to become senbei (flat rice crackers), step aside obediently!" 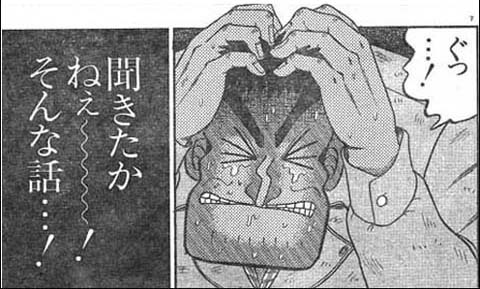 "I don't wanna heeeaaarrr! A story like that....!", says the gentleman.

I'm a native Japanese speaker. I can't post a comment to another writing thanks to a lack of reputation, so I will write here. In my opinion, なりたかねえ is "oral expression" rather than "tough guy like", and it is sometimes used even now. Actually I think sophisticated lady never uses this expression, but I know some girl in a very famous anime often uses almost same phrase. (this is the anime: https://en.wikipedia.org/wiki/Chibi_Maruko-chan)

Although I don't understand the context, but directly translating is here: If you don't want to be a rice cracker (probably metaphor of flat one), get aside from the road without resistance.

It looks like very old Japanese, but you are correct it is this 「なりたくない」

Be good and get out of the way if you don't want to get flattened.

EDIT: To clarify in regards to the comment that this dialect/expression is a current one. This type of dialect was once very much widely used, specifically in the Edo period, but now it is limited to small specific areas in a few parts of Japan. I can't comment on the younger generation in those areas using this type of expression as I don't know how they speak there. But, in mainstream, modern day Japanese in Japan, it is no longer used and would be considered out dated.

If anyone thinks otherwise, do your own experiment and say it to a native speaker that is relatively young and watch the strange expression on their face while they process what you have just said, then have them fire back a question "was that what you were trying to say?". In other words , this is not a typical expression in today's language and will take a little bit to confirm what you were meaning to say, where as any other expression used today will not require that thought.

I must be seeing things, wiki says that Edo dialect among others has just about disappeared in today's Japanese and that it is from a long time ago.

Please let me know where my original statement was incorrect?

Not the answer you're looking for? Browse other questions tagged dialects manga or ask your own question.