Can 野郎{やろう} really have that many meanings?

(Warning: potentially offensive words. Proceed at your own risk. Also, apologies for the length.)

I realize this risks opening up the "does Japanese actually have swear words" debate, touched on here, and a little here too.

However, there is one word that is still hard to nail down: 野郎{やろう}. It seems to cover such a wide range that I just have a hard time accepting most translations.

I was reminded of the topic when, walking through Ebisu today, I looked up and noticed this sign for a mahjong parlour: 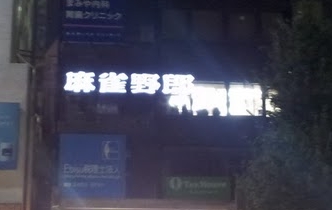 Let's say this store expanded to become an international mahjong chain of stores, and they wanted an English version of their name. What would we translate it to?

According to Space ALC, 野郎{やろう} means bloke, dude, fellow, and son of a gun. Very inoffensive.

But, in that same entry, it also means the mildly offensive beggar, bugger (some might think this is worse), and hoser.

On top of that, it also means the definitely offensive mofo, asshole, and son of a bitch.

Putting aside the bizarre words, we have a range that goes from dude to asshole. That's a hell of a wide range.

I get the fact that words in languages can have a wide range. "Aloha", in Hawaiian, apparently means both hello and goodbye.

But part of the reason I have a hard time accepting the vagueness of this particular potentially offensive word is that, as Japanese learners, we're beaten over the head with the notion that the Japanese hold politeness in high regard so that they are sensitive to the slightest mishaps. Not saying さん after someone's name in a certain situation, or perhaps addressing someone with あなた, would cause offense.

And yet at the same time, we can have a word that goes from dude to asshole and everyone's cool with that?

"Aloha" might mean contrary things, but none of its meanings are potentially offensive, so I can see why it wasn't forced into one particular meaning. But I can't see how a word with high risk of insult survives in a culture that otherwise seems quite rigid about how to avoid offense.

Something doesn't add up in this word, and I suspect it has to do with a great deal of license on the part of most translations. Real offensiveness comes from the words surrounding 野郎{やろう}, not 野郎{やろう} itself.

So... after all that preamble:

What would the most accurate translation of the sign be?

If my idea that the words around 野郎{やろう} are what really manipulate it's offensiveness level, then let's zero in on what exactly the naked word means and what it, and it alone, conveys in offensiveness.

Or show me where and how everything I'm saying is just totally wrong and I'm just being a 馬鹿{ばか}野郎{やろう}.

Perhaps you are assuming that 野郎 has a wide variery of levels of politeness, and that they are continuous, but they are not. Probably, 野郎 is not used in isolation as an insult word. When it is an insult word, it is used in one of the few fixed expressions like この野郎 and 馬鹿野郎.

Also, when used in isolation, a meaning of an insult word or a counterpart of (American) English guy can be conveyed with different accents. In the insult usage, the accent is on the second mora ('yaROu'), whereas the guy-usage does not have the accent nucleus, so it takes the default flat accent (平板{へいばん}アクセント) 'yaROU'. This may indicate that they have actually become different words.

I remember commenting on someone's question/answer previously that an expression like a guy and a girl is discriminative and it should be replaced with a boy and a girl because guy does not have the same polite level as girl. Rather, it connotates some roughness, and using that kind of word only for males is sexual discrimination. 野郎 is the Japanese counterpart to this word. It connotates some roughness, and is used usually only for males. Often 野郎 is used as opposed to 女の子, which is as sexually discriminative as the (American) English counterpart a guy and a girl, but many people do not seem to care.

Since there are only two meanings, which meaning is intended should be clear enough from the context. The insult usage does not have many variations: この野郎, 馬鹿野郎, and perhaps a few more.

The 'guy'-usage is pretty much productive; it works as an affix. A slight departure of the meaning of 野郎 from that of guy may be that the former also connotates some kind of nerdiness when used as an affix. 麻雀野郎 would mean 'Mahjong guy', but it may also be close to something like 'Mahjong nerd'. So the intention of using it as a shop name is to give the image of "a Mahjong nerd's gathering place". There are common expressions like トラック野郎 'truck guy', which means long distance truck drivers who spend most of their time on a (often extremely decorated) truck.

There are other insult words that have come to mean something similar when used as an affix. For example, 馬鹿 'stupid', when used as an affix, means 'geek': 釣{つ}り馬鹿{ばか} 'fishing geek'. The same applies for another word きちがい, but use of this word should be avoided regardless of its usage because of the reasons mentioned in one of the links given in this question.

Additionally, 野郎 (just like baka) as an insult is written in katakana.

Not the answer you're looking for? Browse other questions tagged word-choice slang or ask your own question.

28
Are there words so bad that they aren't allowed on television?
25
Is there an equivalent to George Carlin's "Seven Dirty Words" in Japanese?

17
Are there any Japanese words as versatile as "fuck" in English?
28
Are there words so bad that they aren't allowed on television?
25
Is there an equivalent to George Carlin's "Seven Dirty Words" in Japanese?
17
Is こら a lot more rude than ほら?
6
Is this a slang, and possibly derogatory term, for "lesbian"?
8
Why are these words considered less politically correct?
10
How can I differentiate between "risk" and "danger" in Japanese?
10
Difference between the many words for son and daughter
5
what's the difference between 領域 、範囲 and 分野?
2
does the word "Option" have an analogue in Japanese