What makes using ある for people okay in this context?

Yep, I'm reading a lot of Tintin in Japanese recently, and he keeps throwing me curve balls with the language. Here's another one.

The situation is that the car he was in has been run off the road into a small lake. A few people have gathered around to see if he's okay, and he asks if there is anyone in the group who can drive him the rest of the way to Nyon (a small city in Switzerland).

Here's how he asks: 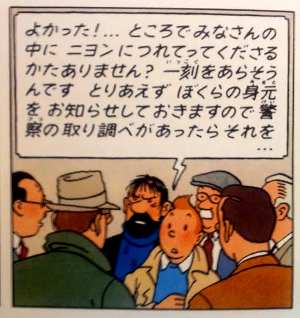 Unless I'm missing something, he is using ありません, the negative form of ある, to refer to people. I was taught that one should use いる for people, and that it would be rude to use ある, because of the obvious implication that you are referring to them as inanimate objects.

Especially since he is asking for a considerable favour from strangers, shouldn't Tintin use いる?

Why did the translator opt to use ある?

Bonus question: Could Tintin have used おりません in this situation? Keigo always trips me up, but I thought おる was a more polite way of saying いる...? I'm not sure if おる is humble or not, and if it would imply he was being humble or if it would impose humbleness on the people he was talking to (and therefore not fit).

Ok, so, in "modern" Japanese, the norm is "ある" for things, and "いる" for beings. However, it seems that it's not a mandatory rule to follow.

〜くださる方がある has probably survived today as a fixed form from more liberal times.

You'll find more such idiosyncrasies around, as in words like 在宅{ざいたく} which means "to be home" but where the root is 在る{ある}.

Not the answer you're looking for? Browse other questions tagged word-choice keigo copula .

14
What is the implication when a gruff old man ends a sentence with わ?
14
"Your sniffling is driving me crazy!"
6
What makes に基づいて instead of に応じて the correct choice for this question?
0
What makes 飯場 sensitive?
5
Using 持っていく with people
3
What makes 『青年』 and 『少年』 different?
2
Using polite form for neutral subjects
0
Would this be an okay response in Japanese?
0
What are the rules for using 最高敬語?