what is this kanji? why is it used?

Please look at the 2nd kanji in the 熟語 that starts with 陰: 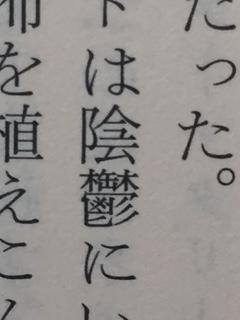 That 熟語 means "grimly" and looks like a 形容動詞. Example usage:

Using New Nelson I looked under 陰 and did not find that 熟語.

This kanji is 「うつ」, and it should appear in the kanji conversion list on Mac when you enter these kana. One of the most common words it appears in is [鬱病]{うつ・びょう}, which is the word for "depression". Another is [憂鬱]{ゆう・うつ} which also means "depression", "gloom", or "melancholy". The former is (I believe) the medical term for depression, while the latter is more subjective. Other than that, I'm not too sure on any other nuances between them.

The word in question is [陰鬱]{いん・うつ}, and the sentence would be something like:

You can get the sense of sadness and disappointment of the person by the use of this word; especially since they mentioned that they failed again.

It's 鬱, which is read as うつ. See this entry from Wiktionary for details.

IMEs can easily convert うつ into 鬱, but don't worry, I don't remember how to write this kanji by hand. Although it's a 常用漢字 since 2010, it's too complicated :-) I believe many native speakers are like me.

Actually, this character is famous as an example of insanely complicated kanji. 厚切りジェイソン, a foreign comedian, often uses this kanji in his bits.

Your third question is a bit hard to answer because there is not enough context, but I personally think 陰鬱 is not uncommon at least in novels.

is a rarely used kanji due to its complexity (I think this is the most complicated kanji in the jouyou list?), and it stands for depression, melancholia. Some words using it include:

Most of the time when you see this kanji it will be read with the on-yomi ウツ but jisho also gives the kun-yomi readings of うっする、ふさぐ、しげる which do not seem to be normally used.