Is there a standard way to clearly differentiate similar handwritten (kana) characters?

I often have a lot of trouble clearly writing certain pairs in a cleanly distinguished way, for example, シ and ツ, ソ and ン, and to a much lesser extent the pairs ユ and コ and サ and せ. Is there a standard variant form for these characters, or do you just annotate it with its counterpart from the other kana when you want to be absolutely clear about it, like [シ]{し}?

There is a related question about distinguishing certain kanji from similar-looking kana, but that is not a problem I've really had.

This is one of the reasons why stroke order can be important. When looking at handwritten characters, you can get a sense for what each one is even if it's relatively illegible by looking at the direction and order of the strokes. 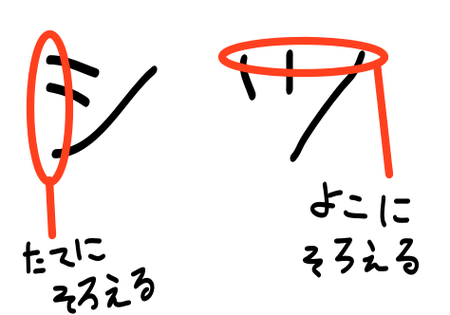 You can follow a similar convention with ソ and ン.

With せ and サ this is just a matter of remembering which is which. You wouldn't really confuse them in normal use since one is hiragana and the other katakana.

And finally, all confusion should be solved by context. If a word you're looking at only works with one possibility, that's probably what it is.

28
Distinguishing certain characters in handwriting and print (Similar-looking Kana and Kanji)
12
Is there a standard for where to put spaces in kana-only Japanese?
2
Is there a traditional Japanese kana song or otherwise how are babies familiarised with kana?
5
Is there any way to input hentaigana into text documents?
6
皆さんはどんな字を書いていますか？ / How do Japanese speakers write kana or kanji by hand?
5
Is there a term for whether kanji or kana is used?
7
Academic/historic attempts to create an alternative writing system similar to Hangul?
6
What are these Okinawan kana-like characters?
10
Attempts to distinguish English "L" and "R" sounds using (extended) katakana
3
Handwritten kana that looks like ヤダ, but I can't find ヤダ in a dictionary