When did diacritic signs 濁点 and 半濁点 start to be used in the Japanese language?

I heard notation method of them were enacted in the period of Showa after WW2.

This is a post card that was made before Showa era. はがき is written as はかき on it. 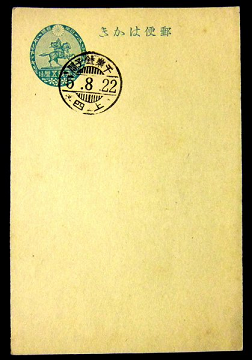 However, actually it seems that they are used since long ago.

It seems that 濁点 was used since Hiragana was invented in the 10th century and that 半濁点 was invented by Portuguese missionaries in the 16th century.

Originally they were used as supplementary symbols for pronunciation.

Here are two pages from a book written by the Portuguese in 1599, digitalized by Sophia University: Page 1, Page 2.

The 4th line from the right of the second page can be read as 「悪を退け善に勤しむべき事」. 「べ」 has 濁点.

Not the answer you're looking for? Browse other questions tagged history kana kana-usage .

13
Japanese/Chinese numbers usage timeline
21
When did the "wu" character drop out of use?
84
What are the differences between じ and ぢ, and ず and づ?
1
Sokuon Diacritic and Wabun Morse Code
5
When did 全然 get restricted to the negative?
3
When and where did 丁寧語 emerge?
0
history of learning japanese
7
When was 歴史的仮名遣い standardized?
3
When did the word 「女性観」 come into standard usage? Is it a more politically-correct form of 「婦人観」?