For the longest time, I thought that a verb ending in て+いる meant that one was currently doing an action, similar to how we use ~ing in English to mean a contuinuing state. So 食{た}べている means "eating".

However, I've run into confusion over sentences like 日本{にほん}に来ている. I thought it meant, "coming to Japan" but apparently it actually means "came to Japan and still here".

After some looking into the issue, it seems that there is a thing in Japanese called a "punctual verb". These are actions that can not be extended or divided, so they're either done or not done. 来る it would seem, is one of these verbs, because you have either come or not. At least, as far as Japanese is concerned.

However, the matter is not entirely resolved for me. Consider this screenshot from a weather report: 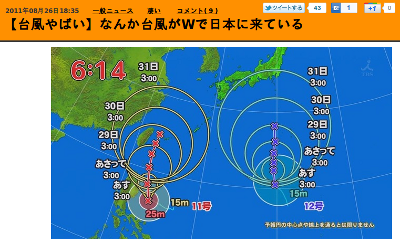 Shouldn't 台風{たいふう}が日本{にほん}に来{き}ている mean "the typhoons have come to Japan and are already here"? However, according to the dates included in the image, it is clearly depicting that the typhoons are on their way, in the process of coming.

What is the dividing line between a punctual action and a continuing action, and how does one know which verbs are which?

I think the question is answered by now, but in any case I just wanted to mention that Martin’s Reference Grammar of Japanese describes three different uses for ～ている:

You’ll need context to know which of the three meanings is intended.

Further, as other people have said, some verbs are perceived as “punctual” and don’t have the continuative (no. 2) meaning. They can still be repetitive or resultative. Such verbs include 行く、開く、来る、出る and many others.

You can read the whole section on google books: http://books.google.com/books?id=SszxbMtHbs8C&pg=PA517#v=onepage&q&f=false . There’s a list of punctual verbs on page 518.

I found this interesting page that explains the different meanings of 〜ている. The authors self-proclaimed at the bottom of the page that they are expert Japanese teachers so I'm going to trust that page in order to answer your question. (Here is the Japanese version of that page - you need to use Shift_JIS encoding to view it though)

Here are some text quoted from that page (examples are given in romaji so I left them as is):

1.Indicating a continuing action (be ～ing)

*Verbs which are used in this usage are almost transitive verbs.

Kare wa heya no naka o aruki mawatte imasu. (He is walking around in the room.)

Soto wa ame ga futte imasu. (It is raining outside.)

Now, you might ask "Is 来る not an intransitive verb whose subject animates?". The thing is, in Japanese 来る is an instantaneous action verb, meaning it focuses on whether the subject has come or not; it does not look at the progress the subject is making in "coming". It is just about "has the subject come or not?". As a result, you can hear that when the subject reaches the destination, the other people who are at that place would shout 「来た！」, and while the subject is still at that place he is "来ている", meaning as far as his coming is concerned, he has already come thus he is still maintaining his state of "already come": 来て+いる.

Then there is a question of what to say when the subject is on the way, i.e. "is coming" in English sense? That's when we use 〜て来る form. While most 〜て来る verbs mean "to do something and return", there are some verbs that when used with 〜て来る form mean "is currently coming here doing X", for example 歩いてくる, 走ってくる, 飛んでくる etc. 歩いてくる does not mean "to walk and return" but "is walking here".

At this point, we haven't really wrapped up why 来ている used with typhoon means that the typhoon is coming rather than it has come, have we? Remember in two paragraphs back I stated that in Japanese 来る is an instantaneous action verb? Well, the thing is there are times people are interested in the process of something coming to their location. The news was announcing an upcoming typhoon so in this situation the coming of the typhoon is the context of interest, and the verb 来る is referring to the movement of the typhoon, thus 来る has now become an intransitive verb whose subject animates, thus 来ている takes the meaning of "is coming" in this context.

If that still fails, let me just take directly from the page linked in the first paragraph: it is a natural phenomenon, which qualifies it to take the meaning of "is coming" .. 許してあげてください :P

There are some caveat emptors, though. Some verbs in the Japanese language are not considered continuing, in sharp contrast to other languages. One example is 来る ("to come"). 電車は来ている means "the tram has arrived".

It can mean an action that has already been completed.
ご飯はまだ食べてない。
Aww, but I haven't eaten yet.

今ご飯を食べてるからさぁ。
I'm in the middle of dinner. (can this wait?)

We do the same in English grammar sometimes.
1) I ate dinner

Look! I ate my dinner.
Look! I have eaten my dinner.

notice that the past simple can be used in place of the past perfect and present perfect in English.

The only way you know if the Japanese verb is a past or continuous event is by the context or by a modifier such as an adjective in the sentence. Words like まだ or 今 will give you a nice hint.

Not the answer you're looking for? Browse other questions tagged grammar .

23
Can't に always replace へ?
6
た or ていた? Is "turned right" a state or an action?
16
Does "te-form" of a verb always include て/で? Why?
2
What is the main action with がてら (in the given example)?
3
Further clarification on ~てある
4
Usage of the verb 続く in past tense
1
Can the auxiliary verb Vteみる along with Vteいる i.e. Vteみている make the imperfect verb into a perfect verb
1
Usage of ている in Punctual Verbs in Japanese and the Concept of Present Perfect in English
0
How do you express "have to" in order to talk about a non-obligatory, but obvious course of action?