Why does 屋根 means roof and 天井 means ceiling? Shouldn't it be the contrary?

I was learning these words with my kanji list, and I thought that I made a mistake and switched their meanings, but after checking the dictionary again I realized that actually their definition are correct.

Is my logic flawed?

屋根{やね} is a compound of 屋{や} "house, dwelling" + 根{ね} "root → fundament, base supporting the whole". This word is quite old, appearing already in poem 779 of the Man'yōshū, one of the oldest pieces of written Japanese dating to 759, with parts that appear to be older still.

The age of this term might point to its origins: houses in ancient Japan were dugouts, where the roof came right down to the ground: 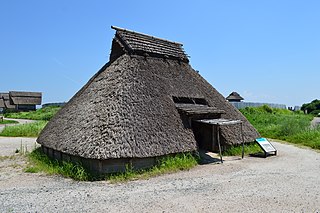 There is more about these houses here on the relevant Japanese Wikipedia page. As such, the thing that formed the basis of a house was the roof itself: "house + basis", thus 屋根{やね}.

Meanwhile, 天井{てんじょう} was borrowed out of Chinese. At its root, this is a compound of 天{てん} "heavens" + 井{じょう} "well; wellhead; wellhead shape". 井 read with the kun'yomi of い refers to a "well", as in the place where you lower a bucket to get water out of the ground. 井 read with the on'yomi of either じょう or せい can refer additionally to the 井桁{いげた}, the crossbeams at the top of the wellhead. The crossbeams themselves look a lot like the shape of the 井 kanji, which is probably where this character came from:

By extension, 井 read as じょう or せい can refer to something with this same shape -- much like what rafters or crossbeams might look like, over which the ceiling of a room would be laid: "sky → the area above one's head + wellhead crossbeams", thus 天井{てんじょう}.

The Kanji by itself means roof, House, shop, dealer, seller. I am not a native Japanese speaker, but I have been trying to learn kanji for several years. Something I have found is that many times when we are trying to learn we overthink and assume that the meaning of the two Kanji's add together to form some sort of logical meaning, and though this is often times the case, I have found that sometimes you just have to learn the meaning of the two characters put together. If it were me, I would relate the first Character to "house". The second one is harder because it means root. There may have been some history in the way houses were built early on in China that caused the roof to be considered the origin Of the house, but I would just take this one on faith.

I don't know if this will help you any but as I have been learning I have tried to find resources that will help me. I keep all of my Kanji vocabulary in a flash card application used on an iPad. This application is made by chegg. I have also found an incredible site called Tangorin.com which allows me to look up words and shows me examples of the usage of that word. They are all written in Kanji. You can also create vocabulary lists and lists of example sentences that you can study if you're trying to memorize kanji.

Another helpful resource that you can use is an application by Yomiwa for the iPhone which can read a Kanji character and translated directly. It is the coolest thing I have ever found it it used to be free. Unfortunately they now charge for it but it is still a steel because it is so worth it it might be like $2.99

18
Where does the word ダイヤ come from that means "train schedule"?
4
Why does 甲斐 use these particular kanji?
9
What would be the most apt word in kanji, for "Animal world"?
7
Is there a reason why [中]{ちゅう}[古]{こ} means used/second-hand items ?
11
Why does the word for "surgery" 外科 have the 外 kanji?
1
I don't understand why 差し支える means what it means
3
Why are the kanji for suika and kabocha written with the kanji for west and south?
0
夕立: why 立 if the word means "a sudden evening shower/rain"?
7
Why does the kanji for coffee have a king 王 radical?
0
What does 聞く actually represent (if it means both ask and listen)?