Why are there two versions of the kanji for 冷?

The screenshot below is from Kotoba for iPhone. 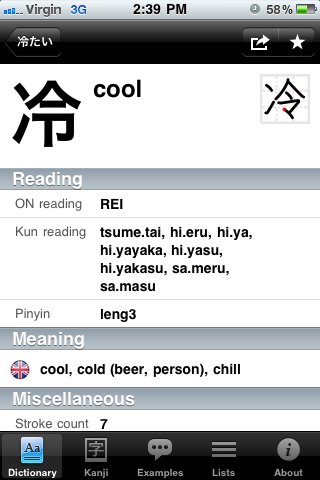 It shows the character for "cool", 冷 as used in the word 冷たい. However, the character in the stroke order diagram is slightly different to the main one displayed top-left!

Why is this? Which one is correct? Or are both correct?

I suspect the stroke order diagram actually comes from a Chinese font, rather than a Japanese font. I'd like to confirm this.

Thanks to Lukman for the following screenshot: 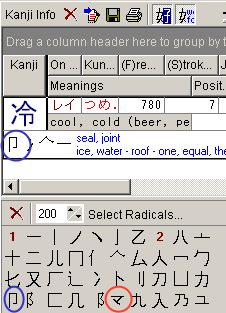 The Chinese/Japanese thing is a red herring: here are two more sources clearly aimed at Japanese people showing this handwritten form. It is true that the printed Chinese form looks more like the diagram, but this is just because the "official" printed Chinese form was revised to be more in line with the pre-existing standard written form, shared by both Japanese and Chinese.

If you won't take my word for the above, check out the jōyō kanji guidelines [PDF] from the Ministry of Education. Scroll down to the section headed "明朝体と筆写の楷書との関係について" and you will see many similar cases of difference between standard printed and written forms, along with the Ministry formally declaring that these differences do not result in "different characters", or that the written form is "wrong". ("... 筆写の楷書における書き方の習慣を改めようとするものではない。 ... 印刷文字と手書き文字におけるそれぞれの習慣の相違に基づく表現の差と見るべきものである。")

Note that the character 令 is actually one of the examples in their "筆写の楷書では，いろいろな書き方があるもの" section, and the form with a final vertical is recognized as a possible "correct" handwritten version, so if it makes you feel more comfortable, go for it! Just don't be ragging on people who write it diagonally, because that's cool too.

It's nothing to worry about, I would go as far to say that it's not even a different "radical". (How can it be? It's the same Kanji.) Just like in English, things get, shall we say, "corrupted" in hand writing. Nothing is ever as neat and pretty as the pixels on a finely crafted character.

Fortunately, this is an easier one to remember. Ignore my awful mouse handwriting. 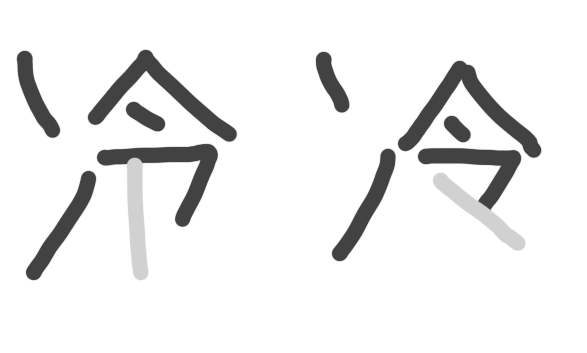 I've seen entire sections reduced to squiggles. Look at this for example: 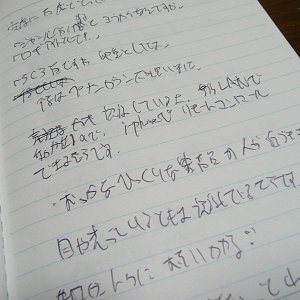 In summation, keep it in mind and move on to the next Kanji. You're going to find a lot these types of "differences" along the way. Enjoy!

They show the character "S", as used in the word "Script". However, the character in the pictures are entirely different to one another! I have seen even more variations!

Why is this? Which one is correct? Or are they all correct?

Don't panic. They're variant forms of the same character. You will encounter others. Chinese characters are very old, and have evolved in a variety of ways, including scriveners' errors, simplification, vulgarization, invention, etc., etc., etc. Fortunately, unless you're reading pre-war texts, most variations in use now are pretty easy to remember.

It’s just differences in font/handwriting. But as a side note, I've always written the version in the top-right of your screenshot, that's just how I was taught for Chinese.

Many differences in the printed shapes of some characters are due to the different regions importing different sets of handwriting features into the print shape. For example, the Republic of China (Taiwan) standardised the character as somewhat of a hybrid:「{{zh-TW:令}}」, with handwritten form「龴」and printed form「亼」.

Note that「龴」is not actually a meaningful component. It may be useful as a graphical element to describe characters specifically for an ideographic description sequence decomposition, but「龴」is not originally a character or common mark, and it is only coincidence that some modern shapes of characters happen to contain this. For instance:

11
What's the deal with/origin of the character 曰?
10
Why is there a difference between the hand drawn 道 and the pc font one?
6
“Cold” in Japanese: When to use 寒冷
5
Meaning of font variation in the case of the character 賭
9
Variations in the “same” kanji, how do you know which one to use?
8
How different is 冷やかす from 冷やす? And 散らかす from 散らす?
2
Is the 女 radical ever written with the strokes くフ?

13
How do I look up this kanji?
5
Meaning of font variation in the case of the character 賭
4
Handwriting liberties
8
Is there an “official” font or other writing standard that should be used when teaching kanji?
9
Stroke order explanation for 凸 and 凹
3
母 stroke order irregular compared to 日
4
How to reconcile stroke order with font variation on 衷?
9
Variations in the “same” kanji, how do you know which one to use?
9
Why are Japanese fonts different to Chinese?
7
Why does the kanji for coffee have a king 王 radical?