Here is a short text I've encountered in a manga I'm reading: 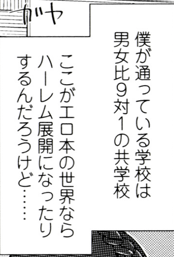 The main character talks about his school where 男女比 (the sex ratio) is 9 to 1. At first I thought it means that it has 9 times more boys than girls since 男 is put before 女. However, from the next sentence as well as the events that follow, it is clear that the school is actually full of girls.

My question is: would a native Japanese speaker think in the same way? Would they be surprised by this reverse order at least a little bit? Or could it be that the word 男女比 doesn't at all imply that the number of boys will come first?

"My question is: would a native Japanese speaker think in the same way?"

I am not every native speaker, but if I were given the phrase:

with absolutely no other context or information and no prior knowledge of this manga, I am pretty sure that I would think the same way as you. In fact, I thought exactly that way when I read that line today.

"Would they be surprised by this reverse order at least a little bit?"

Not sure about others, but I myself was not so surprised when I read the following line. I know such schools exist in real life. You have probably heard about our shortage of children. Quite a few (private) high schools that had originally been single-sex have gone co-ed recently in order to recruit a sufficient number of students to survive as a school. For the first few years after that major change, you will often find an unusually lopsided sex ratio in the enrollment.

"Or could it be that the word 男女比 doesn't at all imply that the number of boys will come first?"

The number of boys would certainly come first more often than not. The fact is we could not change the word 「男女比」 to 「女男比」, and saying 「1対9」 instead of 「9対1」 would not sound as natural or impressive when the number you really want to emphasize is the "9".

Japanese is a contextual language. A phrase or sentence does not always have to make perfect sense all by itself. If you have read the surrounding sentences and still do not understand that phrase or sentence, then you could say that is a problem.

Not the answer you're looking for? Browse other questions tagged words manga .

9
Terms for Japanese/Western name order
6
How to order pizza or dinner on the phone
3
Question about repeating the object after だ
16
Are the days of the week named after the planets?
4
How to interpret 「ニッポン死ね」 in the following context
1
か after short forms
4
The meaning of しきり after a noun
-1
How relevant is gender in comparing last name-kun/chan compare to 1st name-san?