I was watching an anime called Ganbare Goemon and there was this sign that I found a bit strange: 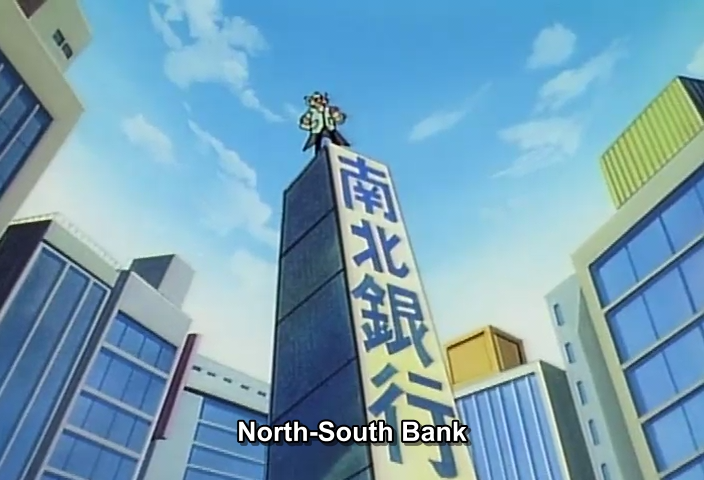 How exactly are you supposed to understand it? I mean, north and south are in opposite directions so isn't it contradictory? Or does it mean that it covers all areas from north to south? Or is it perhaps just a name that doesn't really have any special meaning?

Oh, and I want to mention that English is my second language (I'm from Russia) so maybe there is some sort of language barrier that makes it sound weird for me.

It means nothing, trust me.

In manga/anime, authors customarily create weird, non-sense or parodic proper nouns for companies, schools, newspapers, etc. They do so because they are legally not allowed to use real existing proper nouns.

Among the most famous and often used are:

「毎朝新聞」← The most famous Japanese newspaper that does not exist!

I have been seeing this imaginary newspaper name in manga, dramas, etc. all of my life. It is so obviously taken from both 「毎日新聞」 and 「朝日新聞」, both of which are existing major newspapers.

You will see those often as well. Upon seeing/hearing the 「[帝都]{ていと}」 part, most Japanese-speakers will think of 「[東京]{とうきょう}」. 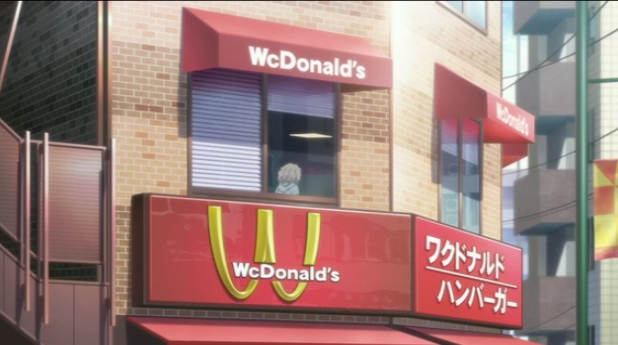 Likewise, 「[南北銀行]{なんぼくぎんこう}」 is just an imaginary bank. It would be pretty useless analyzing the 「南北」 part. It just means "south and north" and , even though this bank does not exist, it looks "normal" for a business name and that is all that matters. Looking "kind of normal" is the key here. Unless it is important to the story, you do not spend much time thinking of a unique and great-sounding proper name. It simply will not serve its purpose.

The fancy name for this kind of word is Dvandva (from Sanskrit): there is a Wikipedia article on this, but I do not think it is very good. Basically this is a compound made (in Chinese or Japanese, where there is no grammatical case or anything like that) by putting together two opposing or contrasting words, neither or them being the head of the construction. So it is not that the first qualifies the second or vice versa -- the meaning is the contrast between the two. Very often, in English there is a completely different term for this.

A couple of examples:

Now [東西]{とうざい} ("east-west") is commonly used to refer to "East and West", and the associated culture contrast; [南北]{なんぼく} can similarly refer to North and South hemispheres, though the commonest reference I think is [南北]{なんぼく}[戦争]{せんそう}, the American Civil War between the "North" and the "South".

So there is nothing mysterious about the name, and it does not sound the tiniest bit unnatural (disclaimer: I am not a native speaker). You will meet thousands more words and names like this...

If you go to Japanese wikipedia -- here's the article on the American Civil War https://ja.wikipedia.org/wiki/%E5%8D%97%E5%8C%97%E6%88%A6%E4%BA%89 -- then copy just the first two characters 南北 into the "Search" box, you can see all the suggested entries beginning with 南北.

Not the answer you're looking for? Browse other questions tagged words anime or ask your own question.

17
What is the meaning of 金〇

14
Why are the words for prefecture so complicated?
6
Saying northeast, northwest, north-north-east, etc
5
Some words I'm not understanding
1
Please help me understand [予習]{よ・しゅう}
3
そういう君は～、 そういうおまえこそ～ - meaning?
8
Doesn't Japan call North Korea "北朝鮮" ? why?
18
How do Japanese understand "non-standard" words without looking at kanji?
14
Does 韓国 mean "South Korea" or "Korea as a whole"?
1
Unusual words in anime