Nuance between いっとき and いちじ as a pronunciation of 一時

I am writing a flashcards deck to memorize Minato-ku's list of 防災-related words.
Excerpt:

As you see, one says 一時 as いっとき and the other one as いちじ.

This is an official document, so I don't think it is a case of "use the one you like it is exactly the same". Other official documents mark the exact same difference, for instance here is the yellow 東京防災 book sent to all families in Tokyo: 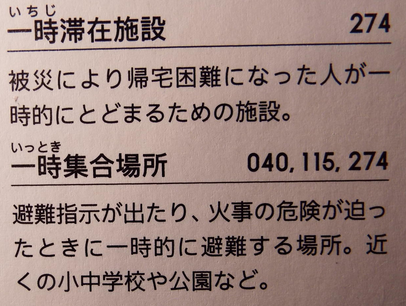 So, what is the nuance difference between いっとき and いちじ ?
Real-life examples appreciated, references would be wonderful.

(Turning my own comment above into an answer. There will, however, be no references provided as OP requests. Everything I state here comes directly from my head as an average native Japanese-speaker.)

First off, I would like to make it clear that this is not a question of nuance. This is a question of what I might call the "practical and intentional reading/pronunciation alterations".

Not too many native J-speakers would feel that the reading of 「一時」 in 「[一時集合場所]{いっときしゅうごうばしょ}」 sounds natural. The far more natural reading of that part would indeed be 「いちじ」. So, why would some towns and districts employ the "funny" 「いっとき」 reading in their official publications?

That should be to artificially make a distinction between 「一時集合場所」 ("temporary meeting place") and 「一次集合場所」 (primary meeting place) or more precisely, 「[一次避難場所]{いちじひなんばしょ}」 ("primary shelter").

By intentionally reading 「一時」 and 「一次」 differently, one is supposedly less likely to confuse the words above in times of emergency. Since the places described by these terms concern people's safety and sometimes even lives, the local government would want to make sure that we understand the differences among the places.

These practical and intentional reading/pronunciation alterations are nothing new to us.

Take the words 「市立」 ("municipal") and 「私立」 ("private") for example, the "dictionary" reading is 「しりつ」 for both. When we talk about schools, however, "municipal" and "private" can make huge differences. To avoid the confusion, we often alter our readings of those words. We would often read 「市立」 as 「いちりつ」, and 「私立」 as 「わたくしりつ」.

Another "famous" pair is 「科学」 (science) and 「化学」 (chemistry). The official reading is 「かがく」 for both, but we quite often read 「化学」 as 「ばけがく」 so that the listeners will know exactly which one you are talking about.

Again, nuance has nothing to do with it in the two pairs of words above, either.

As a nuance, 一時（いちじ) means tentative or temporary, like:

However, to force residents to read 一時集合場所 いっときしゅうごうばしょ is felt not only an absurd bureaucratic triviality but also a farfetched abuse of the word to me. It sounds really odd and ugly.

If you show the word indicating "一時集合場所" to your Japanese friends, I bet nine out of ten of them would read it "いちじしゅうごうばしょ," and that's why Tokyo officials had to awkwardly add 振り仮名.

Not the answer you're looking for? Browse other questions tagged words nuances readings time .