For those who might not be familiar with the series Tintin (soon to be in a major motion picture, by the way), there is a character named Captain Haddock who is famous for shouting out colourful exclamations when he gets upset.

His signature exclamation when he's surprised or angry is "Blue blistering barnacles!". At least, that's what it is in English. I don't know what the original French would be. In any case, it's just sort of an arbitrary thing to shout.

In Japanese, his trademark exclamation is made into 「コンコンニャローのバーロー岬！」. 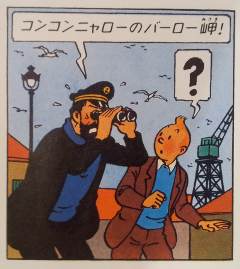 (In the panel above, he is looking at a ship in the harbour, and the ship has raised a flag saying it is in quarantine, and he's just shouting his surprise, the same way one would yell "Oh no!" or something like that.)

This is obviously not a direct translation of the English (or the French, I assume), and I know it's just an equivalently arbitrary colourful thing to say. However, I'm struggling to parse exactly what he is saying.

I know the last バーロー is probably just a katakanization of the name "Barlow", and 岬【みさき】 is "cape," as in the coastal geographical feature. So it ends on "Cape Barlow".

I'm thinking the コンニャロー is an abbreviated この野郎【このやろう】, which translates to something like "you rascal", or worse, depending on how severe you think the context is.

The first コン really throws me. I don't think it's just a stutter, because he says it this way each and every time. Even in some other cases where he does clearly stutter, this repetition is still preserved.

The use of の throws me a bit too, as I struggle a bit with the use of の in general.

I can't make it come together. What is he shouting?

As you said, コンニャロー is abbreviated この野郎, which means “you bastard.” バーロー is abbreviation of ばか野郎, “you fool” or something. In this case, probably neither of them is directed to any specific person, but both are used just as general phrases for expressing frustration or anger.

Other parts do not have any meaning. Huh?

Well, バーロー岬 is a pun of バーロー and バロー岬 (Point Barrow, the northenmost point of the US). But obviously Point Barrow has nothing to do with this exclamation.

コンコン might refer to yelping of a fox, but it is unclear what it refers to because anyway it has no reason to refer to anything here.

I do not know what の signifies here, but it definitely sounds more natural to me than コンコンニャローがバーロー岬 or other particles. I cannot explain why. (I did not know Les Aventures de Tintin, so it is very unlikely that I prefer の just because it is used in the story.)

If you listen to the rhythm, コンコンニャローのバーロー岬 is made of four parts: コンコン (4 morae), ニャローの (4 morae), バーロー (4 morae), みさき (3 morae). This is considered as a rhythmical phrase. In Japanese, a block of two or four chunks of four morae is often considered rhythmical, and the first and/or last block can have one less mora. So, while neither コンコン nor 岬 has any specific meaning, they are there to make the whole phrase to roll off the tongue.

I think コンコン also has an effect to bring smooth transition to the subsequent element コンニャロ in terms of sound. "kon" phonetically is a part of "kon-nya-ro". So, "kon-kon-konnyaro" sounds like a stutter (to me). By the way, do you know ニャロメ, a cartoon character created by Fujio Akatsuka? コンニャロ could be expanded to コンニャロメ, and I cannot help thinking that ニャロメ went through the translator's head. You have to be in your 40s or over ;-)

I cannot help with the Japanese-English translation. But I want to point out, that, in the original French version, the Captain says «Milles milliards de milles sabords» which translates roughly to «Thousands of billions of thousands of ports/scuttlings» which, doesn't say much "things" but is pretty much a tongue-twister like "Blue blistering barnacles!" is for an Anglophone. I say the Japanese version will PROBABLY tend to mimic that.

Not the answer you're looking for? Browse other questions tagged word-choice translation particle-の or ask your own question.

25
Is there an equivalent to George Carlin's “Seven Dirty Words” in Japanese?
11
相手の日本人 or 日本人の相手?
2
Understanding それを美しいと感じると考え

43
How indistinguishable is blue from green really?
4
What does 「～知ってください」 mean in The Blue Hearts' song リンダリンダ?
4
What is the correct way of saying “see you”?
3
Saying someone “looked cool”?
1
What is pimsleur saying (shtain desnoga)?
1
Saying “some” as in “What are some examples of this?”
1
What is the right translation and saying for ”Paper World”