Where does the furigana split on 小路? 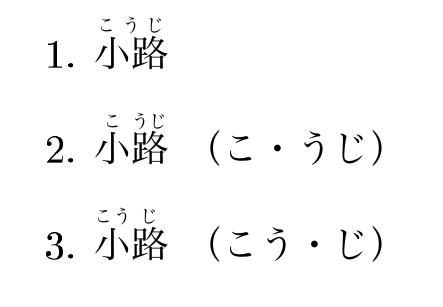 Where does the furigana split on the word 小路{こうじ}? Does the う belong to 小 or does it belong to 路? Or is the word considered to have a 熟字訓読み (i.e. no split)?

小 has the reading こ

路 has the reading じ

Where does the う fit in this?

Japanese language has varied throughout history.
Vowel reduction and change from ''m'' to ''u'' brought out ''こうじ''.
As an example similar, [日向]{ひゅうが}, which is the old name of Miyazaki prefecture, was [日]{ひ}[向]{むか}.
It has changed like himuka -> himga -> hiuga(=hyuuga)

Meanwhile, 600-700 years ago, たちつてと used to be pronounced as ta, ti, tu, te, to, so the process of change I gave above doesn't include spelling mistakes.

小路 should most likely be split as 小 (こう) 路(じ). The vowel lengthing is probably emphatic and used to distinguish it from other homophones. Also to mention my IME puts 小路 at the bottom of the list for こうじ so I think it is not a common reading.

Goo 辞典 says it is a sound change from こみち, and it also links to 大路 (おおじ). While it makes no mention of the etymology, just how the sounds ぢ -> じ merged, I would say 小路 (こみち -> こうじ) changed to contrast with 大路 (おおじ), which has a long vowel from 大.

Not the answer you're looking for? Browse other questions tagged etymology readings furigana or ask your own question.

16
Is there a logic for deciding when to employ furigana?
10
Why is this 理由 【りゆう】 given the furigana わけ?
6
Is there a name for this furigana convention
9
What does it mean when newspapers give furigana for 常用{じょうよう} kanji?
7
What's it called when furigana push characters apart because they're so long?
3
Furigana: Usage and application
6
Ordering of writing furigana in multi-character words
3
Why would a light novel have furigana for common kanji?
2
Is it correct to split the reading あした of 明日 as 明（あ）日（した）?