I can't stand 立つ【た・つ】: Do all its meanings derive from “stand”?

I have an issue with the word 立{た}つ, which is that I get it's basic meaning is "to stand", but I see it used in all sorts of ways that don't make sense to me.

Here are some examples, from various native sources, where 立{た}つ throws me off:

My translations, flawed as they may be, are, respectively:

"One's looks are influenced by the environment, because one's disposition changes."

"It's seems somehow like the stars are making noise."

"After some time the pulp(ingredients) in this juice will settle."

Can someone break down for me how these concepts are "standing" in these examples? Hopefully so I can get some insight that will help me own and use 立{た}つ like Japanese people do. :)

[This answer is based on my personal (inner) research]

In a nutshell, all the extended uses of たつ derive from a single meaning, which is not exactly what you'd imagine from the English word "stand". 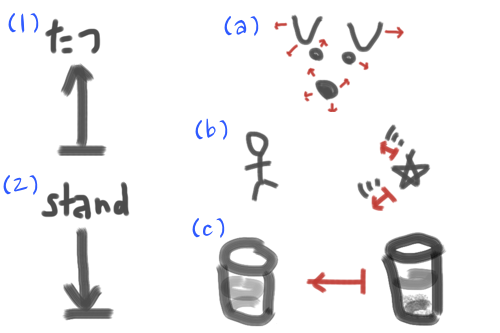 So if you only have the word "stand" in mind when you try to understand たつ, you're ill-equipped. You need to mix in some sense of "forward/upward motion" to accurately translate たつ; facial features stand "out", stars give "off" sounds, time "goes".

A lot of the usages you mentioned are idiomatic. So 「腹が立つ to get angry / pissed off」 refers to the worm that lives in your stomach getting angry, IIRC (according to Japan's Cultural Code Words). In general, 「立つ」 doesn't refer only to the action of standing, but also coming to be, or taking shape, such as 「波が立つ a wave rises/appears」. Because of this it's sometimes used as an intransitive verb to show that something was accomplished or finalized, as in 「計画が立ちました the plan was finalized / we finalized our plans」. Note that Japanese often uses intransitive verbs to show that a transitive action reached a successful conclusion, as in the previous example.

Not the answer you're looking for? Browse other questions tagged kanji definitions or ask your own question.

8
What kind of verbs can the suffix たて （立て） attach to?

8
Is 日語 a good two-kanji stand-in for 日本語 (“Japanese language”)?
2
Can't find this kanji
2
Natural way to understand 景気の善し悪しが影響するという
2
I can't identify this kanji
1
all the readings of 父
2
Can't recognize one character
3
About 同形の別字 and its meaning
2
I can't translate 天吼
4
I don't understand a definition of one of the meanings of 途方?
1
I can't identify this semi-cursive kanji