What is this script called?

I have seen this script many times before, but the best information anyone can give me is that they are archaic and almost no one uses them. Here is a photo of the characters then versus now: 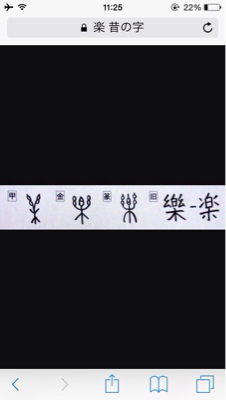 There are five distinct scripts in that picture, all reflecting forms of the Chinese writing system.

From left to right, we have: oracle bone script (甲骨文{こうこつぶん}), bronze script (金文{きんぶん}), seal script (篆文{てんぶん}), and then modern handwriting (traditional and Japanese simplified). Oracle bone script is the earliest attested form of the Chinese script.

One theory is that the character 樂 depicts a set of drums mounted on a rack -- this can be better seen from the oracle bone inscription.

Not the answer you're looking for? Browse other questions tagged kanji archaic-language writing-identification calligraphy .

10
Why "greengrocer" kanjis are 八百屋 (やおや)?
3
Are most kanji characters morphemes?
5
How many possible phonological forms could be represented by a randomly chosen single character?
0
How to find out the meaning of hand-written japanese?
0
Why is the Kanji 「驍」read 「たける」?
3
What kind of Japanese "dialect" is this?
1
Questions About Archaic Japanese
2
What are these kanji? (Image)