What does this ad say? (Connotations of ガキ大将)

This is a frequent problem that I think many Japanese learners experience. You look at some Japanese sentences, and you understand the words, and most, if not all, the grammar, and yet still, it just doesn't seem to mean anything.

That is the case when I look at this ad that I recently saw on the subway: 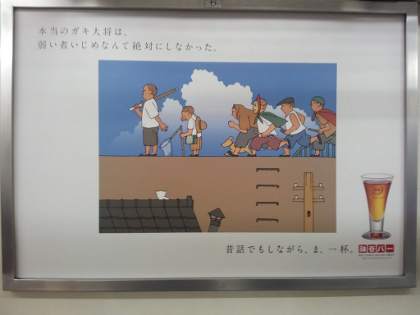 And my rough translation:

The leader of the gang never bullied the weak ones.

While talking about old time, hey, have a glass.

がき means more like "punk", but in this case since it's plural, I opted for "gang". 一杯 means a full cup, but I went with "glass" as in "have a glass of beer".

The second sentence, that one should enjoy a beer while talking over the old times seems clear enough.

The picture adds to my confusion? I think the kid on the far left is the leader of the bullies, the kid with the broken net is the victim, and the rest are the gang. It looks like the leader is the one who broke the net...? It seems to contradict what the words say.

Apologies if you did already realize this, but it seems like maybe your troubles are arising here because you aren't aware of the range of meanings of the word ガキ大将. (You can find it in Daijirin and Wikipedia etc. using the all-kanji spelling 餓鬼大将.)

It has a lot of cultural baggage attached -- the Showa nostalgia level is over 9000, for starters -- but an important point is that it doesn't necessarily mean "leader of the bullies" as in someone to be avoided. Sometimes, the gakidaishō is just the toughest, bravest member of the local gang (= kids who play in the area), and therefore their leader -- someone who protects them from bullies, who are not part of the gang. And of course, there can be gray areas, kids who are bully-ish but have strange changes of heart: think Giant in Doraemon and Nelson in the Simpsons.

I think that this is the point of the ad: "Back in the day, the real gakidaishō [the kids we looked up to] weren't bullies." The picture is a bit blurry, but maybe the point is that the kid on the left isn't the gakidaishō -- he's the bully! And so the gakidaishō and his friends are on the right, rushing to the scene of the crime to teach the bully a lesson.

As for the second part, yeah, you are surely right on there.

Not the answer you're looking for? Browse other questions tagged word-choice translation culture copywriting or ask your own question.

13
よかろう - What does it mean? Where does it come from?
1
Colour connotations in Japanese language?
1
Does the word 津波 (tsunami) have negative connotations?
4
身にまとう related question
1
Japanese sentence that needs translation
0
The use of strategy/戦略 in this line
2
Can't understand what this passage is trying to say
8
What could a phrase like アルコールはダメなんだ possibly mean?
0
Who would あやつ reffer to in this context and other considerations