In the manga Dragon Ball, a girl is captured and frightened to be sexually harassed. It turns out the sexual torture is simply a blown kiss. She then says: 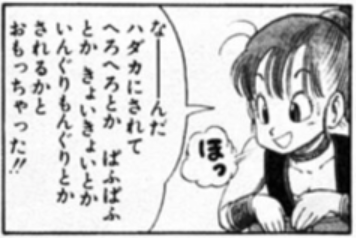 Earlier in the manga, they describe ぱふぱふ as putting one's head between a girl's boobs and squeezing them around.

I was wondering if the other 3 also have something close to a meaning or if they are just random sexually connoted babbling.

へろへろ is actually one of very common Japanese onomatopoeias, and most dictionaries have the entry of it like this.

いんぐりもんぐり is a dialect word in some regions in Japan, according to this website and this professor's answer.

However, in the manga story, the author bound those nonsexual words to special meanings which represent some kinds of sexual techniques. So, in this case, I think I can say that those words are neologisms created by the author.

Nobody knows for sure what those words actually mean, because the author has never officially stated what they mean (except ぱふぱふ). I think it spices up the manga. The unfamiliar funny sexual flavors of those unknown onomatopoeias seem to fire the readers' imagination, which is fun.

In real life, real people don't use those words to mean sexual techniques, unless they are under the influence of the manga or anime of Dragon Ball.

But ぱふぱふ is the exception. ぱふぱふ has been a very popular slang of what it is, since Dragon Ball was published and one of the most popular RPG game series in Japan, Dragon Quest series (called Dragon Warrior in other countries), was released. The character designer of Dragon Quest series is the author of Dragon Ball, so the games contain ぱふぱふ jokes too, although the others, へろへろ, きょいきょい and いんぐりもんぐり, don't seem to be used again.

Not the answer you're looking for? Browse other questions tagged meaning slang onomatopoeia or ask your own question.

10
Do native speakers ever create/improvise onomatopoeia?