Why might this device have both 原稿面上向き and 送信面上向き as equivalents of "face up"?

Recently, I found the following instructions on a multifunction printer/scanner/copier/faxer: 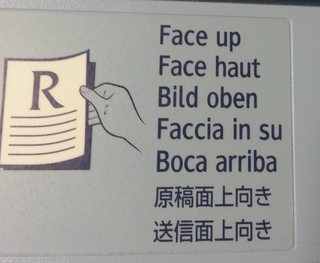 Curiously, there are two lines in Japanese (as opposed to just one in each of the other languages): 原稿面上向き and 送信面上向き. I guess these would be equivalent to "front of the page facing up" and "the side you want to send facing up" (for faxing), but this appears to be redundant. To me, it seems that 原稿面 would subsume 送信面.

Is this just an artefact of how this particular sign was translated, or would devices manufactured for sale in Japan also feature two separate instructions where an English-language device would just have "face up"? If the latter, why? (e.g. might there be some sort of distinction between 原稿面 and 送信面 in Japanese that I'm not aware of?)

I think, this is the Japanese specific they try to explain things as much as possible, so they introduced both explanations.

6
Can と and な have the same meaning?
7
Why does いまいち have the meaning of "not good"?
3
Are "ピーナッツ" and "ピーナツ" both correct for "peanut(s)"?
6
Why does 留守{るす} have two almost opposite meanings?
5
Why should one be careful of soft and sweet words in this neighbourhood?
3
Do all kana have a large and small reading?
1
Is おっすused by both men and women?
1
Why does the word 昨夜 have multiple pronunciations?