Modern names of the obsolete kana ゑ and ゐ

In modern Japanese, the kana ゑ/ヱ (we) and ゐ/ヰ (wi) are largely obsolete. Words formerly containing them now are pronounced with /e/ and /i/, so they were replaced by え and い, respectively.

But when referring to the letters themselves, it would be ambiguous to pronounce them like that. So what are the names of ゑ and ゐ currently? That is, how do you refer to those letters in speech?

Update: I originally said these characters were obliterated from the language. I was wrong about that, as shown in the accompanying picture. 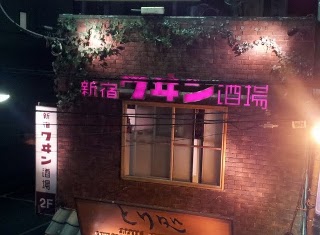 As you can see in the picture above, the character does pop up now and again. I've probably passed by this place in Shinjuku countless times, but never took notice of it until recently when this question had the issue of archaic characters on my mind. So I took a picture with the intent of seeing how people reacted to it.

First, interestingly, it seems from looking up the restaurant on the web (look at the grey furigana above the restaurant name on the linked site), they intend for the middle character, ヰ, to be pronounced as イ, to form ワイン, as in "wine".

However, this is obviously done for very deliberate effect, and only by the context of obviously being a wine bar does the reading deviate from its original pronunciation and take on a modern one.

So it is not read ウィ, as I would have assumed. When I first saw it, I thought it would be read ワウィン, which is a torturous word to pronounce. I think without context like this restaurant, the characters would usually be read ウィ and ウェ, respectively, but their official removal from the language means they are subject to individual play.

I asked some Japanese people around me (some of them strangers in the Starbucks I happen to be writing this at) how they would tell a friend over the phone about this restaurant so that the listener would know the middle character was not イ but ヰ.

Some people at first said that it was simply not possible to describe it over the phone, that it had to be shown. One suggested it might be similar enough to a Korean character to use that as a way to explain it, which is obviously not really a viable method but gives a sense of how unfamiliar these characters have become.

However, after a little while and some group consensus, one description emerged as a clear winner:

Even the people who at first didn't know how they would describe it said that if someone said that to them, they would know what was being described, even if they might have to look it up to confirm its exact shape.

Thus, I think if you really wanted to be understood among people who weren't オタク about writing and characters, saying 「昔の...」 would be the description of choice.

If I talk about the letters ゐ/ヰ and ゑ/ヱ, I would call them ワ行の「ゐ」 (pronounced as わぎょうのい) and ワ行の「ゑ」 (わぎょうのえ), or explain the letters in some way (昔の仮名の「ゐ」 and so on). I may or may not pronounce them as ウィ and ウェ, but I will probably try to avoid relying solely on pronunciation. The same also applies to を/ヲ.

As David M. R. writes, 和文通話表 (the Japanese version of the spelling alphabet) regulates the name of these letters as ゐどのヰ and かぎのあるヱ. However, I would not expect that average native speakers of Japanese know 和文通話表 or that they understand which characters ゐどのヰ and かぎのあるヱ refer to.

Although as Dave M G already explained these characters do not have an independent pronunciation anymore, when spelling something through a telephone, they can be explained as "かぎのあるヱ" and "ゐどのヰ". (Source: Wikipedia ゑ and Wikipedia ゐ)

You can also refer to them by their position in one of the ordering systems of the Japanese syllables. (ゑ is 第46位 in the 五十音順 ordering system, but saying "わ行え段" is certainly easier to remember! ゐ is 第45位 and would be わ行い段). (Again, this is from the Wikipedia article linked above.)

Since there is no way to unambiguously pronounce these letters in modern Japanese, as Dave M G explains in his answer, I'd name them with:

Incidentally, I would name "を" as "難しい方の「を」", or "わをんの「を」". And apparently there are several other nicknames for this letter, including "わ行の「を」", "くっつきの「を」".

[4] いぇびすびーる is not a standard pronunciation of ヱビスビール. See comments below.

But when referring to the letters themselves, it would be ambiguous to pronounce them like that. So how are the letters ゑ and ゐ currently pronounced?

Not the answer you're looking for? Browse other questions tagged pronunciation obsolete-kana language-change or ask your own question.

17
In which dialects have the sounds "ゐ" (wi) and "ゑ" (we) been preserved, and are their kana still occasionally seen?

7
Can anyone explain the obsolete, non-phonetic use of hiragana from pre war times?
82
What are the differences between じ and ぢ, and ず and づ?
14
Why has を been spared but ゐ and ゑ been deemed obsolete?
1
Is "げえしゃ" a valid pronunciation of "芸者"?
9
Attempts to distinguish English "L" and "R" sounds using (extended) katakana
3
What are the common practice of reading names of modern Chinese people?
10
Looking to understand a fantasy name