Since you often need to write your signature fast it should be something short. I wonder which script, kana or kanji, natives use for writing their signature (in most cases)?

Talking about writing signatures rather than using seals, the answer is that they vary, and by no small degree.

Firstly, it's worth noting that not all Japanese have Kanji names. In more recent times, some people (usually girls) are given names purely in kana, and almost always hiragana, sometimes even where the kanji that usually write it are obvious. This is to say that the name on their birth certificate will be in hiragana.

The Japanese government requires that all names be either in kanji or kana, but kana names aren't that common, and are limited almost entirely to women.

The most common is generally kanji. This is the most common way Japanese people write their name, and so it follows logically that signatures write like this. Below are some examples: 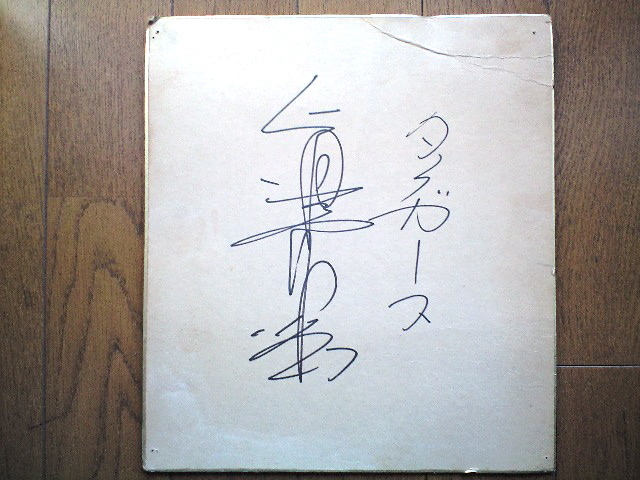 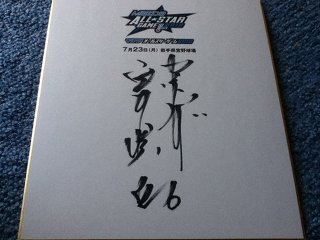 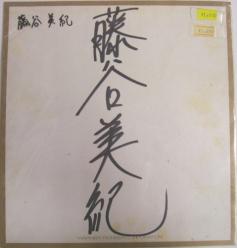 I can't find any examples of katakana signatures in isolation. It's sometimes used to annotate sounds, but wouldn't be used in legal documents, and as it stands few if any names are written in katakana for native Japanese. Hiragana is used, though more so amongst women, and even more in arts such for actresses and seiyuu: 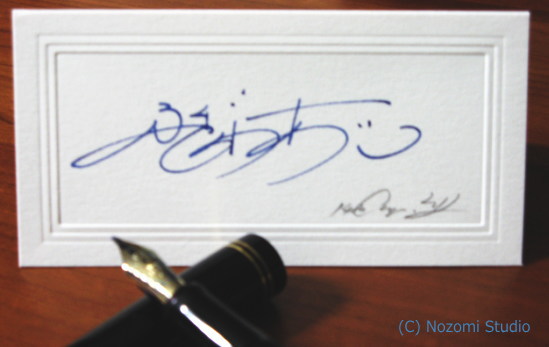 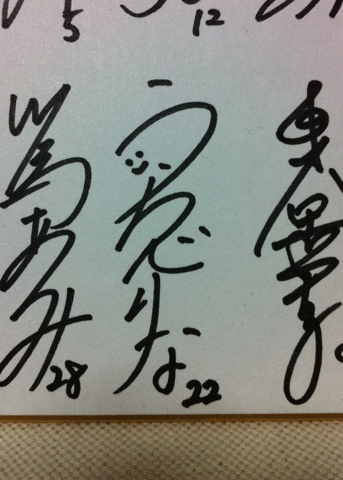 Though the last one actually has the same artist with a kanji signature: 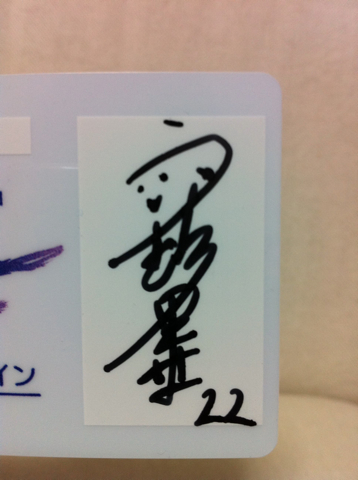 A sign of increasing westernization, and of status, though again not as common as kanji, or hiragana. The image below is an example of this. 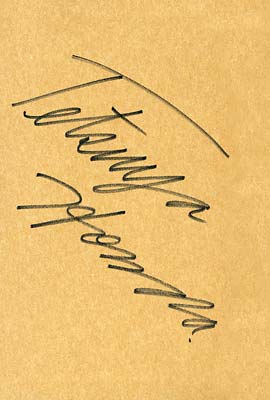 Overall, kanji is definitely the most common, followed by hiragana. Katakana is rare, other than sometimes annotating kanji readings, and finally the small, but increasing number of people who write using romaji. All give off a very different feel, and you may see more of some types in certain occupations than others, especially in arts.

Japanese people use [印鑑]{いん・かん} (or [判子]{はん・こ}) stamps for official "signatures". Here are some common ones:

If they really need to write quickly, they may use [行書]{ぎょう・しょ} (semi-cursive) or [草書]{そう・しょ} (full cursive), but a) that would be for everything they're writing, not just their name, and b) anything official (signing legal documents, etc.) is done with the 印鑑.

It would be helpful if signature were better defined in the question. This is because the term signature can refer to at least the following things:

The answer by sqrtbottle talks almost exclusively about 1 and 2. In an American context, 2-4 might all be roughly the same. In my own case, my signature in English is illegible and doesn't even include every single letter.

For 3-4, the point is that it should be a mark that would be hard to duplicate due to the idiosyncratic nature of writing.

When I deal with "signatures" ([署名]{しょめい}) in Japanese however the situation is quite different -- regardless of whether I'm writing it is in English characters or one of the Japanese scripts.

The most common way of doing 3 or 4 is using an [印鑑]{いんかん}. Inkans come in different degrees of legal validity scaling up from things you bought at a 100 yen shop for signing lighter documents to a [実印]{じついん} which is only used for much more serious matters like signing a loan for a house or car.

A second related concept is [自署]{じしょ} where you can attest that something is you by writing out your full name legibly by hand. For many documents, you need to stamp it with your inkan if you printed it but can just skip this if you hand wrote it ([押印]{おういん}[不要]{ふよう}).

I was just at the driver's license office and didn't bring my 印鑑, but being a foreigner they just had me sign on the border of the revenue stamps. They were not happy with my Western-style initials signature because they wanted at least some legible part of my name on the stamps. By American (maybe more broadly Western?) standards, this would be unnecessary as the thing that makes it a signature is that it suffers from the defects of my writing style.

Consequently, it matters greatly if by "signature" you mean official or formal way of attesting identity or if you mean something you can write for a fan.

12
Heaven in Japanese
12
How do I “understand” kaomoji? (Japanese smilies)
1
Colour connotations in Japanese language?
13
What to say at the cash register in the convenience store
1
How to say “person who is consistent” (in romaji) ? Is it a Japanese principle?
1
Equivalent of “That said, Carthage must be destroyed” in Japanese
9
Why are Japanese fonts different to Chinese?
3
What are the social implications of being too polite lingustically?
2
A question about 依り代