This question about alternate terms for coins focused on the use of ワンコイン, but it got me thinking about slang terms for money in general.

In all the years I've been in Japan, I don't think I've regularly heard people use slang terms for money they way they do in, say, North America.

In Canada, everyone routinely uses "loonies" to refer to the one dollar coin.

A guy from the US recently said to me, "it's all about the Benjamins." Bucks, greenbacks, cheddar, and more are a matter of regular conversation.

I could probably say, "it's all about the Fukuzawas," but I think they would see it more as me at play than using a commonly accepted slang.

On the coin level, in North American English, we almost exclusively use nickels and pennies in place of "5 cent coins" and "1 cent coins", for example.

By contrast, I can't think of anyone referring to a hundred yen coin in any way except its value, 百円{ひゃくえん}.

Am I right in thinking that Japanese on the whole don't really feel a compulsion to give nicknames to their units of currency? A little web searching hasn't turned up a wealth of terms that I was unaware of, but my Google-fu is always a little lacking in Japanese.

By the way, bonus karma points for anyone who can translate "it's all about the Fukuzawas." I can't figure out how to convey the vague "it" part which refers in a vague way to life or living or "the reason to do stuff".

My Google-fu isn't doing any better, so the best I can do is throw my single data point into the ring and say that I have heard, on multiple occasions, "Yukichi" (not "Fukuzawa") used in colloquial conversation to refer to a 10,000-yen note. So if you really wanted to, I suppose you could say something like:

大事なのは財布に諭吉がいるかいないかってことさ。 The important thing is whether you've got the Yukichis in your wallet.

At which point you take one last draw on your cigarette before flicking it away and riding off into the Tokyo sunset on your tricked-out Vespa.

Historically, we have to remember that all throughout the Tokugawa period traditionally, the merchant class was at or near the low end of the totem pole (see note), and so the enshrinement of capitalism we see in many Western countries never really found its way to Japan. This may account for the relative lack of "colorful" terms for referring to money in Japanese. (Warning: this is all armchair historian talk and highly speculative.)

※ sawa brought an undefended claim against this statement, so I will attempt to clarify here. The idea that the merchant class was regarded as one of the lowest feudal classes derives from Confucian philosophy, which played a large part in the formation of Japanese culture. The merchant profession, being one in which money was gained without producing any goods or (seemingly) contributing any value to society, was often looked on less than favorably by the rest of the populace. (For more information, see The Making of Modern Japan by Marius Jansen or Japan: A Modern History by James McClain.) This is not to say that all merchants were corrupt (only some were, as in every society), nor is it to say that they did not play an important role in the formation of modern Japan (they certainly and emphatically did). As with many traditional ideas, this view of merchants faded with time, and is entirely absent in today's Japan.

Although not a word, the only "slang" I've ever "heard" for money is to rub your thumb back and forth across the tips of your middle and index fingers; often accompanied by これ ("money") or どうですか？ ("Are you making money?").

Most of these may be more colloquialism than slang but for what it's worth:

There should be more if not a whole lot more. Just listing off the top of my head the ones that I rarely, if ever, hear/see Japanese learners use.

I saw a tweet that led me here. The person is a doctor and Japanese translator living in Austria. He made me wonder if it was true so I checked Google like a good millennial who speaks and reads, writes, breathes North American English... Google Translator is no way my failsafe but since I didn't feel like emailing my college professor for East Asian History from 8 years ago I decided to check. The tool can be quite accurate at times. Looks like money did mean something with Yukichi as stated years ago here by a commentor. But the Satoshi thing was also interesting given that its 2022. And well... enough said. The tweet was claiming that "Satoshi" is slang for 10000-yen in Japanese writing. 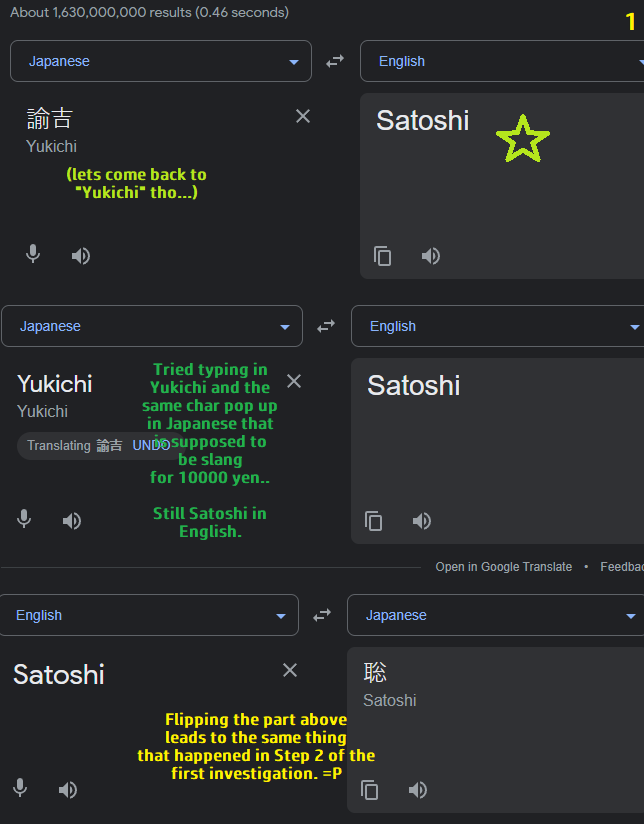 Not the answer you're looking for? Browse other questions tagged word-choice words slang .

5
Are there names like ワンコイン for the other coins?

23
Rules for slang of Japanese numbers
9
Terms for Japanese/Western name order
15
Terms for Royalty
4
Slang for "funny", うくれ？
8
Are any Japanese words ever intentionally misspelled for any reason?
2
Is 小判{こばん} understood as a slang term for coins or money in general?
8
Japanese slang － まんじ、マンジ、卍
3
Is there any slang for 絞首刑?
1
What terms are used for a non-native speaker of Japanese?