What's the meaning of this pastry pun?

I saw a sticker set being used on a popular social platform the other day that I found very interesting. They were pictures of food items, sweets mostly, and had words next to them that seemed to be portmanteaus mixing Japanese phrases with the names of the food. I was able to identify some:

Pretty straightforward so far, but then there is this one: 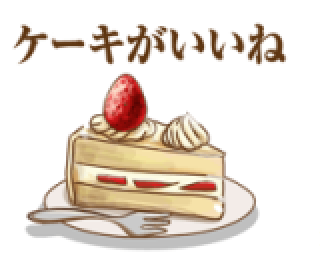 After consulting a dictionary, I thought maybe it's a pun on 景気がいい, meaning, "the situation is good," or "business is good." I'm not very confident in this analysis, since I personally can't recall having come across this expression myself.

Sticking heads together with friends didn't turn up anything either, and the one Japanese person we were able to ask about this replied, "Well, cake is good." I don't think she understood our issue all that well.

What kind of pun could this be?

I would say it is a pun on 景気が良い like you guessed.

Informally the long vowel mark ー is often used in place of the sound イ, for instance けいこ→けーこ.

The expression 景気がいい is used quite a lot. References:

Do all stickers use extremely simple words that any 5-year old would understand? If yes, then 景気 would stand out as a more difficult word and Earthliŋ's suggestion of 天気がいい would apply better, I guess.

Not the answer you're looking for? Browse other questions tagged meaning puns or ask your own question.