The origins and mechanics of pitch accent in SJ compounds

For the past few months I've been researching pitch accent in Japanese off and on, concentrating on trying to identify regularities in a phenomenon which is nearly completely arbitrary.

I've not seen any research dealing with the genesis of pitch accent though. I have seen a paper which I can't find at the moment which gives evidence that in English loan words, the pitch drop often, but not always, correlates with the primary stress in the source language. That seems like a reasonable origin for pitch accent in English loans.

Is there any regularity to how SJ compounds (and native words for that matter) acquired pitch accent? A hypothesis of mine: did SJ compounds start off as unaccented (平板) and then somehow develop accent as they become more common? Or does some quality of the Chinese reading predict the resulting pitch accent?

Also, what are the rules which underlie pitch accent, particularly when accented words are combined, or when prefixes (like 御) are affixed? I already understand that particular endings, such as -通り have a "de-accenting" quality which removes any accents on the words to which it is affixed. What other regularities exist?

EDIT: One more question: Martin's "Reference Grammar of Japanese" gives the pitch accent of 故 as yúé (in his notation). I didn't think a word could possess two stresses — is this what he intended to notate?

Finding some method in this madness was actually part of eminent linguist Haruhiko Kindaichi's 1951 Ph.D. thesis. Kindaichi found a perfect correspondence between Chinese tones and pitch accent of Japanese kango. However, it was not with the Tokyo accent that is now standard and taught in textbooks, but the Heian period court accent.

Kindaichi found that one Heian period dictionary, called the Ruiju myōgishō, contained not only the four Chinese tones in use at the time, but also marked the corresponding Japanese accents. The perfect correspondence is shown as follows: 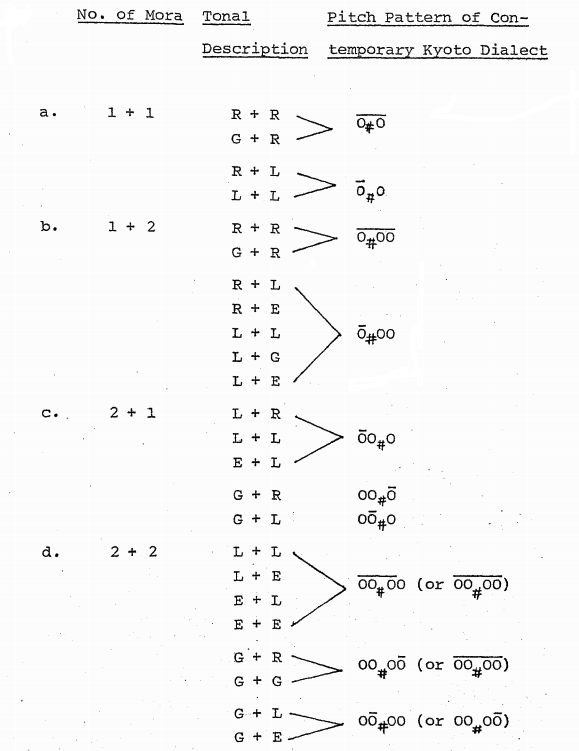 The court intellectuals of the Heian period who were pronouncing the Buddhist terms found in the Ruiju myōgishō would have been familiar with the Chinese tones and regulated their speech accordingly. Obviously, this was never the case for the general public. While the categories found in the Myōgishō are still generally adhered to today, the formation of the Tokyo accent would have transformed the resulting pitch accents according to its own rules, for example:

Source: Shimabukuro, Moriyo, A reconstruction of the accentual history of the Japanese and Ryukyuan languages

Not the answer you're looking for? Browse other questions tagged pitch-accent or ask your own question.