Is the kanji/kokuji "taito" (たいと) with 84 strokes legitimate and ever used?

Taito is mentioned as the kanji/kokuji with the highest stroke count consisting of 84 strokes in Wikipedia.

Taito is composed of two kanji ("cloud" (雲) and "dragon" (龍) repeated three times each for a total of six characters and has the meaning of "the appearance of a dragon in flight"). It is also a ligature formed from 䨺 (tai) and 龘 (tō). It has also been pronounced daito (だいと) and otodo (おとど).

Apparently, there are two variations: 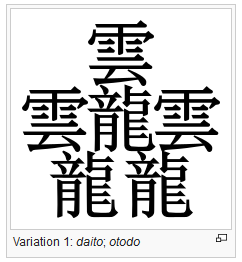 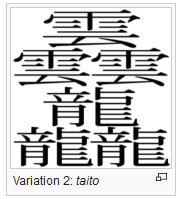 Wikipedia also adds that it may have been used in Japanese surnames but there are no citations. There is also an equivalent character in traditional Chinese.

Nihonshock.com says that it might have started as a joke and gained legitimate usage in history and explains the character as below:

According to a 2002 newspaper article from Kumamoto, somebody in Japan was apparently using this as their personal name as recently as the 1960s. The kanji has been included in the most comprehensive computer-based dictionary software available (the konjyakumojikyou).

So what is the real story behind this character? Can we say that it is legit and was it ever used in the history?

Related question: Which kanji has the greatest number of strokes?

Here is a page showing a detailed study on citation history of the kanji:
http://atonal.fc2web.com/mr/something/gather/otodo_taito/otodo_taito.html

According to it, there is a book from 1981 called 姓氏の語源 'Etymology of Surnames', and it has a short story about the kanji, which goes; One day a young guy showed up at a brokerage office, bought a large amount of stock in cash, and showed the staff a namecard which has the kanji written on it.

But this is basically a hearsay of hearsay of hearsay...stuff, and as far as the above page tells us, this seems to be the only clue to the possible (if possible) existence of the person name, which, no one knows if it was registered in koseki, or at least it has been used within a small community, or it was just a personal invention for a pseudonym.

So that's it. I think the kanji is infinitely unreal.

EDIT: By the way, this 'equivalent character in Traditional Chinese' that the en.wikipedia cites seems to be just three 龍, with no 雲 accompanying. So, actually, it is not 'equivalent' to our kanji in question.

This is not a definitive answer to your question, but the koseki register (accessible here) does contain the separate pieces as kanji appearing in officially registered names:

It is thus definitely possible that there was (or is) someone with the name [䨺龘]【たいとう】. However, the koseki does not have an entry for the ligature of the two characters.

We cannot hope to disprove the existence of taitō/taito as a single character. However, there is no evidence in the koseki register that this character existed (in a name) as a single "ligature" of 䨺 and 龘. On the other hand there is evidence that the individual parts exist(ed) as part of a name. Maybe (by some version of Occam's razor for kanji) we should conclude that taitō/taito does not exist as a single character, but only as two characters, 䨺 tai and 龘 tō.

By the way, the kanji with the largest number of strokes registered in the koseki is a kanji consisting of four copies of 龍, giving 64 strokes, which is read テツ・テチ

For more characters with large stroke counts see my answer on Which kanji has the greatest number of strokes?

Not the answer you're looking for? Browse other questions tagged usage kanji history names stroke-count or ask your own question.

3
What purpose did the kanji read "たいと" (雲雲雲龍龍龍) serve?
11
What is the significance of a repeated radical in a Kanji character?
10
Which kanji has the greatest number of strokes?

20
Recent creation or adoption of hanzi characters into Japanese kanji
10
Which kanji has the greatest number of strokes?
8
Was "The Tale of Genji" really written completely or almost completely in hiragana?
1
A kanji with 108 strokes
-1
How do I find out the written form of a notable person given their name's pronunciation?
2
Is the 女 radical ever written with the strokes くフ?
5
What is the upper radical in the Kanji 悪?
9
Can "Yutaka Umeda" (name of a Japanese mayor) be read as "Jo Baiden"?