The correct stroke order of 凹 is apparently:

Is there any reason for this order? Why, for example, would one not write the vertical | stroke to the bottom right directly after the 3rd stroke, effectively reducing the stroke count to 4?

Same question for 凸, the correct stroke order seems to be one of these: 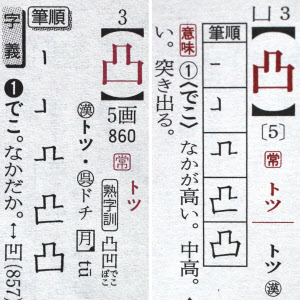 So how did people come up with these stroke orders?

The stroke order you mentioned is the correct one indeed. It can be found in the 新漢語林【しんかんごりん】, for example.

This page, kakijun, offers an explanation for the stroke order:

Traditionally, ie. based upon the 字彙【じい】 and 康熙【こうき】 dictionaries, 凹 is categorized under the 凵【かんにょう】 radical, so this part is written individually. 凵 is written with | stroke to the right last, as in 凶 or 画. The remaining part is written following the general principles left-to-right and top-to-bottom.

Remember that although there are rules and guidelines, the exact stroke order can involve some arbitrariness. The page linked above also mentions an alternative, more logical stroke order based upon the character's shape.

Same reason as above, it is categorized under the 凵 radical, and thus the top part is written indiviually. As can be seen in the image you posted, there is some variation to how the top part can be written, although the stroke order to the left with the vertical | stroke first seems to be more common, it is also the stroke order indicated by the 新漢語林.

This entry on akatsukinishisu mentions that there are some people writing 凸 and 凹 with one stroke as well. It also notes that uniquely shaped 卍, categorized under the 十(じゅう) radical, is written with the 十 part individually as well, giving some credibility to the explanation for 凸 and 凹.