When writing by hand, can kana be half-width and kanji be full-width?

Simply I find when I'm writing I can only make kanji so small before they become sloppy, but I can write kana nice and small. Is it allowed to write half-width Katakana/Hiragana alongside regular width Kanji?

If you can how would this work horizontally and vertically? If not, what's the point of half-width?

This probably varies from person to person, at least a little bit, but generally each character should be approximately the same size as any others (i.e. full-width). If you don't, especially with katakana (which are formed from pieces of kanji), you can end up with situations where you cannot tell whether something is kana or kanji. For example

I'm not entirely sure what the general use of half-width kana is; the only places I have ever seen it used is in places that are never mixed with kanji, such as the name input for a bank transfer at an ATM (my name is also recorded in half-width katakana in my bank book). Many websites also explicitly require you to input the reading of your name in full-width kana, as well.

I would say that the general rule of always use full-width unless explicitly told otherwise is probably safe.

In usual handwriting, kana often turn out smaller than full-fledged kanji, especially kanji with many strokes. (Though practising writing both kanji and kana the same size is probably an important step towards achieving a nice balance between kanji and kana size.)

Some fonts have comparatively small katakana, which I find very easy to read. 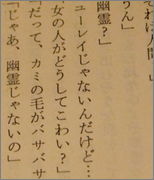 I don't think half-width katakana have anything to do with handwriting. Half-width kana are squashed in the horizontal direction by a factor of two and used for saving space in typed documents (e.g. on 通帳, in ATMs, etc.), when choosing a small enough font size would be too small to read easily. I don't really recall seeing half-width kana mixed with kanji.

In any case, I think it's fine to write kana a little smaller than kanji, but I don't think you should aim for squashing your kana horizontally.

Not the answer you're looking for? Browse other questions tagged orthography kana handwriting or ask your own question.

41
Arabic numbers: half-width or full-width?
28
Distinguishing certain characters in handwriting and print (Similar-looking Kana and Kanji)
11
When writing vertically, where do small kana go?
7
皆さんはどんな字を書いていますか？ / How do Japanese speakers write kana or kanji by hand?
4
Rules and phenomena about reading/writing words with kanji
8
Academic/historic attempts to create an alternative writing system similar to Hangul?
3
On-/Kun-yomi & Hiragana/Katakana