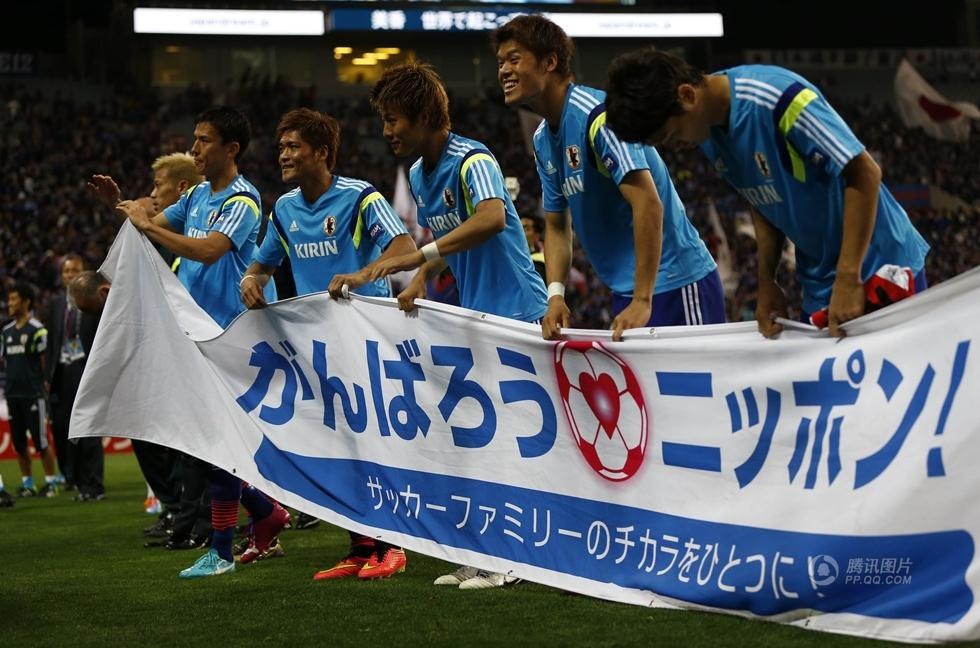 Why is it written in Kana?!

I suppose this banner struck OP as "super bizarre" for either of the two reasons:

Whichever is the case with you, the fact is that this kind of "kana-fication" is very common, and "がんばれ、ニッポン", is recognized as the standard catchphrase of cheering up Japanese national sport teams.

Actually, we're talking about two facts here: "にっぽん is better than にほん (acoustically)", and "ニッポン is better than 日本 (visually)". I think both are true and important. "にっぽん" is definitely the standard pronunciation here.

However it seems to me that OP's main interest is the visual impression of this banner. And unfortunately, the mere fact that にっぽん sounds better, acoustically, does not fully explain why this is written in katakana. Usually modern Japanese uses hiragana, not katakana, to instruct the readings. And we all know how to read 日本 in situations like this; there is no practical need to instruct how to read this in a banner. If 日本 looked better than ニッポン, they'd absolutely use 日本 because this is intended to be seen by millions of Japanese soccer fans who love shouting Nippon! Nippon! Nippon!

That's why I believe this ニッポン is in katakana mainly for visual reasons.

I'm not a native English speaker so forgive me if some adjectives which follow are weird. Anyway, to me, "がんばれ、日本", as written in kanji, looks a bit uncool. It's dull, uninteresting, too plain. To us Japanese, "日本" is simply the plain, matter-of-fact way of expressing "Japan", and I can hardly feel the attractiveness, which is needed for slogans like this.

We always see this kind of kana usage in comics, ads or lyrics written in Japanese. Using katakana or hiragana for words, which are normally written in kanji, has a special visual effect. Just like ALL UPPERCASE or all_lowercase or lowerCamelCase gives different impressions in English comics, logos and ads.

It's hard to generalize the impression of katakana as a design element, though. Simply putting "this is a equivalent of bold face in English" is not enough. Sometimes it's simply impressive/cool, sometimes robotic/toneless, sometimes exotic/peculiar, sometimes mysterious/magical/horror, sometimes nostargic/archaic, sometimes businesslike. You have to be very familiar with Japanese language to fully understand this.

TLDR: In this specific case, I'd say that ニッポン was chosen instead of 日本, for two reasons: a) because ニッポン looks like a foreign word, and thus symbolizes Japanese people performing internationally (cf. サムライ・ブルー, not 侍ブルー), and, b) because they wanted ニッポン to look like something repeated in a loud voice, closer to Ole!, Hurray!, etc.

"日本" is normally pronounced as ニホン/nihon at the present day. In this case, however, the flag designer is aiming at having audiences pronounce it as ニッポン/nippon explicitly.

I would say there's no one specific answer here. It's a stylistic choice, made by the designer based on the target audience and circumstances and cultural norms and expectations and/or the breaking down of same. The choice between kanji, hiragana and katakana is often an arbitrary one, and especially in advertising and design the choice is usually made on the way it will make the audience feel and perceive the message.

In this case, ニッポン just feels a lot more energetic and apropos then 日本. That's all, I think. Just try screaming it:

Not the answer you're looking for? Browse other questions tagged kana .

57
Why are katakana preferred over hiragana or kanji sometimes?
10
Saying ジャパニーズ instead of 日本の
8
Why is Toyota typically written in Katakana? (トヨタ)
3
Why is "Encouragement of Climb" written in katakana instead of hiragana?
2
Why is アタマ written in katakana in the following passage?
1
Why sometimes the same words are used in hiragana and katakana?
1
How is katakana beneficial and or detrimental to Japanese people?
0
Why use kana rather than kanji (and vice versa)
0
Which is the proper form of nightfall?
1
Should hibakusha be written in kanji or kana?
See more linked questions

10
Why is「ん」the only kana without a vowel?
8
Same word - written with kana and kanji in two places in the same paragraph. Why?
3
Is there a term for words that share the same kana spelling?
6
When/why would one write a word using 直音表記?
2
Is there a traditional Japanese kana song or otherwise how are babies familiarised with kana?
4
What are the right shapes of kana?
6
What are these Okinawan kana-like characters?
3
Handwritten kana that looks like ヤダ, but I can't find ヤダ in a dictionary