トウモロコシ: Why kana? What is the etymology?

First came across this written in Kana

Is トウモロコシ borrowed from another language?

What is the etymology of トウモロコシ?

No, it isn't borrowed. The etymology of the word comes from モロコシ, which was introduced to Japan earlier from China.

When maize was introduced to Japan by the Portuguese, it was noticed that it looked similar to sorghum (モロコシ, 蜀黍, 唐黍). The prefix とう was added to indicate it was the foreign good type instead of the (also foreign, but earlier) sorghium.

Since it is based on Chinese, there's also kanji for that word; 玉蜀黍. At first the second 唐 was replaced 蜀 to avoid a silly looking name like 唐唐黍. Then the 唐 prefix was also switched out for 玉, because of its green (outer) colour.

But like most fruits and vegetables, it is generally written in kana today anyway.

Adding on to Semaphore's answer.

The word トウモロコシ is a compound of tō + morokoshi. The morokoshi part is older, so let's look at that first.

Etymology of the morokoshi part

Shogakukan's Kokugo Dai Jiten Dictionary states that morokoshi is the kun'yomi of the word 諸越 (on'yomi of shoetsu). This term came out of Chinese, and originally meant something like "all those Yue", a synonym for 百越 or "the Hundred Yue", an ethnic group in the south of China that formed the state of Yue during the Spring and Autumn period in Chinese history.

When this term was first imported into Japanese, there was relatively active trade with the Yue region, roughly corresponding to modern Zhejiang province. Over time, Yue became commercially less important to Japan, and so the Japanese term came to refer not just to Yue, but to China as a whole. As the Tang Dynasty became the main power in China, the older kun'yomi of morokoshi was applied to the new kanji 唐 that referred to the Tang, and to the compound word 唐土 that referred to the land of the Tang.

Morokoshi (now spelled 唐) was used as a label or prefix for all kinds of things that were brought over to Japan from China. 唐黍 (morokoshi kibi) or "Chinese millet", i.e. sorghum, was one of those things. The Chinese word for sorghum was 蜀黍 (on'yomi of shokusho, literally "Shu millet", referring to various states of Shu in southwestern China in the area of modern Sichuan province), and the kun'yomi of morokoshi kibi was also applied to this word. The term morokoshi kibi was eventually shortened just to morokoshi, but the kanji spelling was kept as either 唐黍 or 蜀黍 when used in reference to sorghum.

Etymology of the tō part

Maize was introduced to Japan in 1572. By that time, the term morokoshi was more strongly associated with sorghum than with China, and the word 唐 (with the on'yomi of tō) had replaced morokoshi as the all-around prefix referring to China and Chinese goods. As Semaphore notes, this meaning was extended to refer to anything foreign that was imported from abroad.

Sorghum and maize really do look quite similar in some ways. The image on the left (or top if on a phone) is sorghum with seed developing. Note the leaves and stalks look a lot like maize, shown on the right (or bottom). 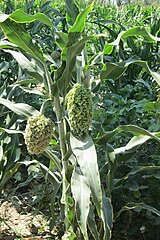 This similarity is probably what prompted Japanese folks seeing maize for the first time to think, "hey, that looks kinda like that other plant, morokoshi."

As such, when Japanese folks saw maize, they saw something that looked like sorghum, and that came from abroad, so they called it "foreign sorghum" -- i.e., 唐 (tō) 唐黍 or 蜀黍 (morokoshi). The change in kanji, and the shift to kana spelling, are just as Semaphore explains.

Not the answer you're looking for? Browse other questions tagged etymology spelling or ask your own question.

3
Why are the words 「とうもろこし」 and 「とうきび」 used more commonly in Hokkaido than 「コーン」?