So I started watching the movie あかひげ the other night and intrigued by the title I looked it up in the dictionary where one of the definitions was:

Does it really contain this meaning?

How is this used (if it is indeed used?!?) in modern Japanese?

If it's not used what word can be used to express "Westerner (derogatory)" in modern Japanese?

Born in Japan and raised in Japan for more than 30 years, I have never seen "赤ひげ" used as a derogatory term of "westerner".

Before I write this, I did find an entry 赤髭 in a Japanese derogatory terms glossary, and it does say it's "Westerner (derogatory)." However, more than 90% of the words in that list were totally unfamiliar to me. So I believe it's safe to say there's no derogatory nuance in "赤ひげ" in modern Japanese. Maybe it was a derogatory term in the Edo period.

Today, "赤ひげ" reminds Japanese (not younger than 30) of what you've just watched in the movie; a humane doctor who sacrifices himself and willingly helps weak people. It is a stereotype of "ideal doctor" in Japan, just like "黒ひげ" or Blackbeard is the symbol of pirates. There is Akahige Prize for doctors.

(However, its original novel, 赤ひげ診療譚, published in 1958, is full of discriminatory terms and acts by today's standards...) 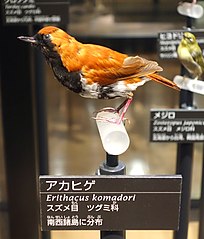 Oddly, the コマドリ or Japanese robin has the species name Erithacus akahige.

赤髭 refers to a fictional, ideal doctor who lived in a downtown of Edo, though there could be perhaps some real models. He took a good care of poor people living in the slums. He didn’t receive doctor’s fee from the needy.

He didn’t mind to visit and treat sick persons anytime whenever at any place wherever in their need. Not only being a good-hearted, lighthearted and merciful man with sense of justice, he was also a master of martial art. He fought resolutely against power and injustice, and busted on rascals and punished those who bully the weak.

There are various versions of 赤髭譚 – Akahige stories in novels, films, and TV drama series. 赤髭 is an ideal character of a man, and there’s no derogatory sense in the word, 赤髭 sui generis.

We also have the similar expression, 紅毛人, of which literal translation is a man with red hair. Both words, 赤毛 and 紅毛人 were invented in the late Edo era when Japanese first encountered the so-called 黒船 ‐ the Black ship and their crew led by the Captain Mathew Perry in 1853. The words were current until early 19 century. But both words are completely obsolete today, together with 毛唐、a derogatory description of westerners.

Not the answer you're looking for? Browse other questions tagged word-usage or ask your own question.

0
How would one would translate "Bearded man"?

1
Unfindable word 爆絶級 in Japanese Mario Maker level name
6
Why is "移民" labelled as a sensitive word in the dictionary? (in relation with or without the history behind the word)
7
What is そんでもって?
2
Can ごめん, like English 'sorry,' be used to express condolences?
0
How come such a "strong" expression as なるほど is used in such a "soft" meaning?
2
What does "の先" mean in this line
3
Is 「謙譲 」really used as a standalone word different than 「謙譲語」？
1
What is the difference between ギャンブラー, 博徒, and 博奕打ち?