I am struggling with the sometimes conflicting uses of 先

Rikaisama's definition of 先 includes meanings like previous; prior; former; some time ago. However it also includes meanings such as front; ahead; the future; destination. I am struggling to make sense of when to apply each meaning since it seems to me that they are pretty much the two sides of the same coin in one word. There's also 先に which can mean before; earlier than / ahead; beyond, among others.

I've noticed that if the meaning has to do with the past, the subsequent verb is in the past tense. This is a good starting point, but it doesn't always help me. Am I forced to learn each usage of 先 individually or is there some "rule" to the word that would help me identify it's meanings in different contexts?

Thank you in advance.

The rule between "prior" or "posterior"

You can judge the usage of [先]{さき} in a sentence if there is これから before 先 or not.

If there is これから, 先 expresses the posterior time.

If there is NOT これから, 先 expresses the prior time.

Exaplanation of the usage of 先

There is a big hint that [先]{さき} expresses the RELATIVE past / future.

I show you how 先 is used: 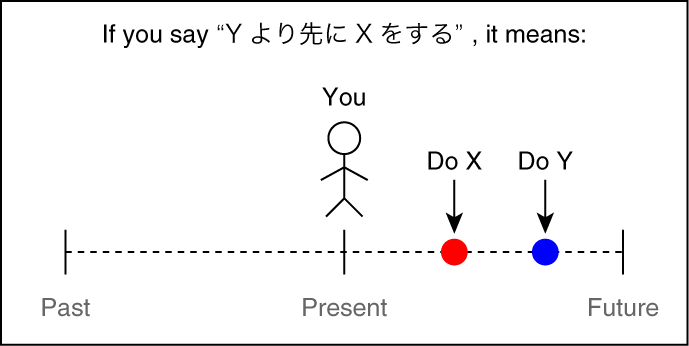 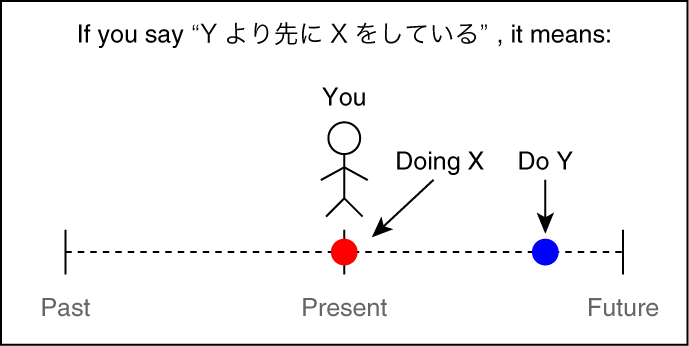 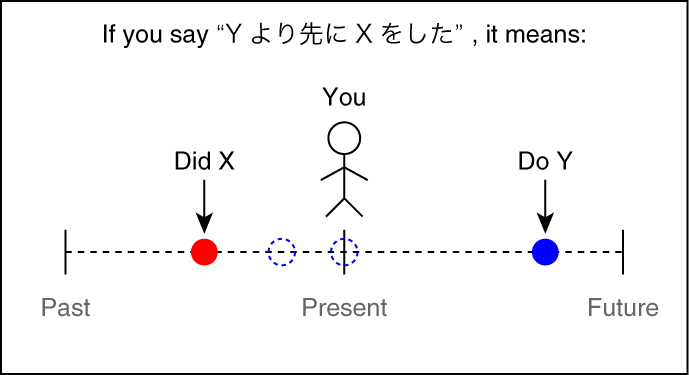 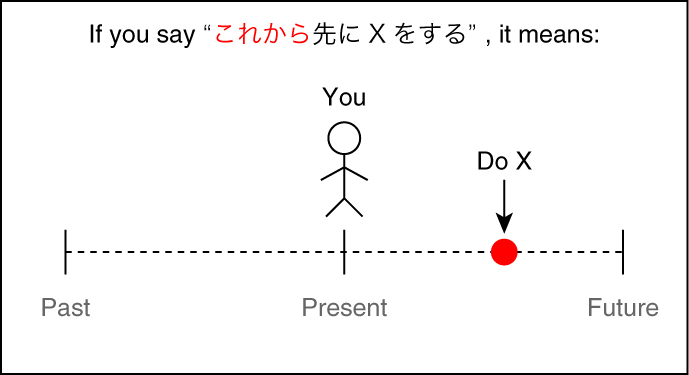 The difference between the "prior" usage and "posterior" usage is that you say with これから or without.

As a result, you can judge the usage if there is これから or not.

My answer is a point of view and doesn't cover other cases like he says.

This is an idiomatic usage but not so special in terms of syntax. For example 先が思いやられる is passive expression and can be converted into active one.

Important: There's no usage that 先 means prior thing if 先 acts like noun.

This proofs that 先 acts like a noun with following が.

この is similar to これから and are swap-able. It's hard to explain but これから sounds more explicit and longer span of time; speaker is talking about things to happen from now on to far future.

I think, similar to 前{まえ}, it depends on the context. Maybe you could compare it to the English "before".

She lay the gift before him. (physically in front of him)

But you could also say,

There is some ambiguity in the usage if you try to restrict the idea to "in front of" or "behind". It really depends on which way you're meant to be facing in the context.

I believe that the most common mental image for さき is the tip of a spear, brush or pen if that helps. Also, it's easy to confuse さっき (which is always the past or previous) with さき which could be either denote past, future, in front, behind, next or previous depending on the context. 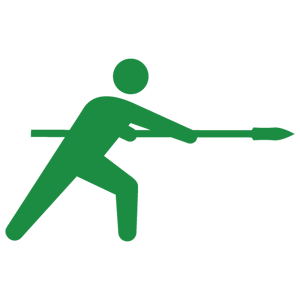 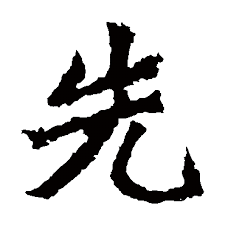 10
sometimes だけ gets mildly confusing..
6
Help with an expression that uses お笑い vocabulary
6
What are the various uses of あまり?
2
All the uses of わけ?
8
The uses of である
6
Is the topic particle は sometimes interchangable with けど?
2
Struggling with identifying the 'correct' verb here (+intransitivity)
3
んです - んだ - Struggling with the practical use / difference with masu form
5
Explanatory の/ん in questions with interrogatives: Two conflicting rules