I am a bit confused with the following facts. 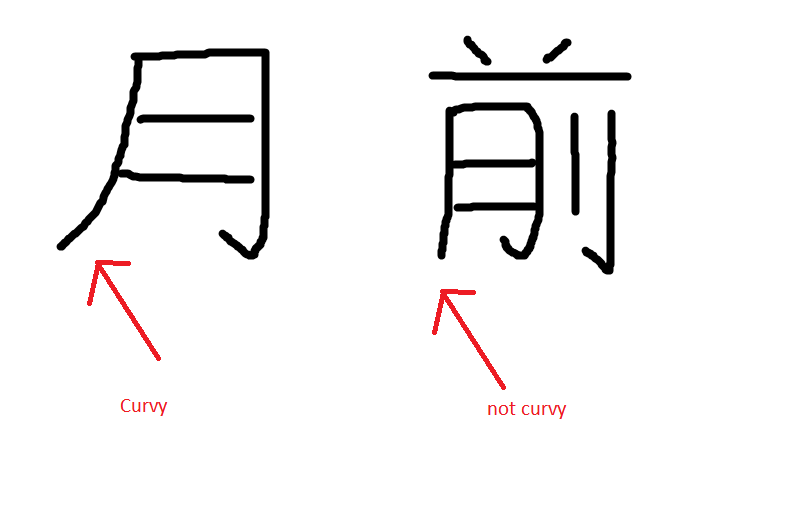 As you yourself observe, 月 looks different on its own than as an element in 前, in which it represents a simplification of 舟. So no, they are not identical.

As an element in other characters, the element that looks like 月 variously represents other historical elements, including 肉, 舟, 丹, and 月 itself, among others. In some characters the derivation is still significant in how they're written—there are variants of 錆 where the lower-right 丹 was simplified to 円 instead of 月, for example. A lot of characters contain this element, so we can expect to see some variation in how it appears.

But we can try to find patterns. When does the left side curve? Here are my observations, based entirely on how I perceive the current forms of the characters, ignoring their history:

These are just my own observations. They aren't intended to be taken as absolute rules, and you may find variation in handwriting or in different fonts. For example, I've noticed that in some fonts on my computer, 潸 falls into category 4 instead of 5. But I think that overall the above is relatively accurate.

In terms of historical development, no, the 月 in 前 wasn't originally the same character as 月 "moon". As you can see in the old Kangxi dictionary here (slightly left of the center of the page, towards the top), the old form of 前 was 止 on the top and 舟 on the bottom. The 止 on the top simplified into 䒑, and the 舟 on the bottom transmogrified into 刖. See also en.wiktionary.org/wiki/前#Translingual.

Not the answer you're looking for? Browse other questions tagged stroke-type or ask your own question.

1
Kanji radicals: Question to the radical assignment in dictionaries

7
What do you call the hooked tip of a kanji stroke?
2
Where does a hane turn?