When do I use できます as opposed to わかります in a sentence?

I know the difference in meaning between the two: できます being "to be able to" or "can do", and わかります being "to understand how to" or "to know". I also know a simple sentence structure for both: "Person は Noun が (できます/わかります)" However, I can't understand which one to use in a sentence. Especially with the use of dictionary form verbs and こと in place of the noun.

I am trying to learn about this grammar point for a test and I just don't understand them. Here is an image of my notes so you see exactly what I'm seeing: 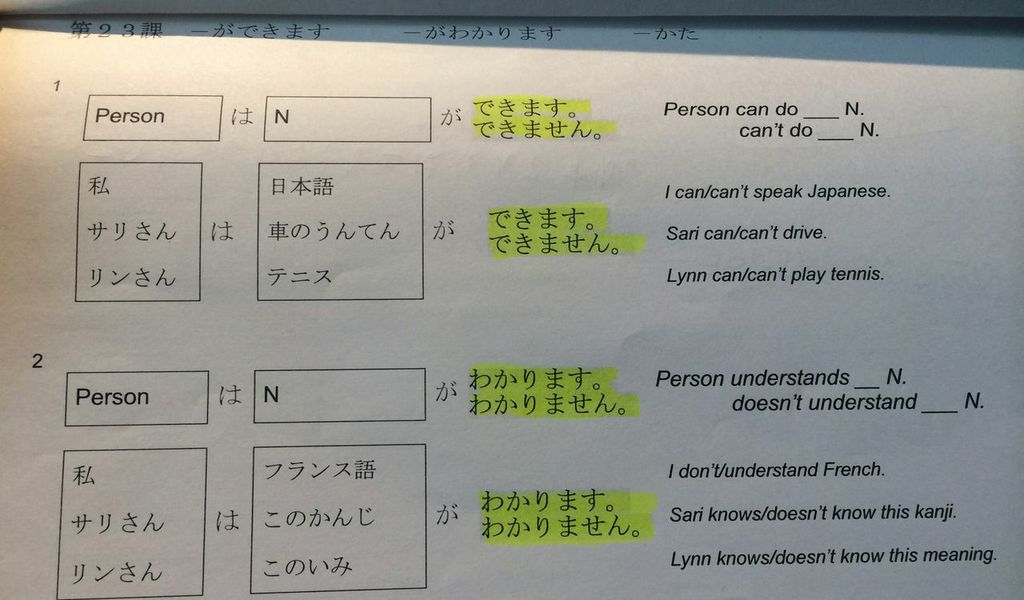 grammar word-choice
Share
Improve this question
edited May 13 '14 at 6:30

To keep things a little simple, I'll just extract one example of each case from all the ones you have on your sheet.

This is fairly straightforward. It says, "Sally understands Japanese."

Here, we're saying Sally has an ability for Japanese. A very direct, slightly clunky, translation might be something like, "Sally is Japanese-capable." You might want to see this answer about the implications of できる.

So, which would you choose? Well, just like when speaking English, saying someone understands Japanese, and that one is capable of Japanese, convey largely the same general idea, and in most daily conversation you probably won't go wrong exchanging one for the other. The difference is a matter of nuance. The first seems, to me, to lean towards the idea that if you speak Japanese to Sally, she'll understand you. The second seems to convey more that Sally can speak Japanese back to you.