How would one emulate capitalized letters in Japanese?

How would you reproduce this effect in Japanese?

I don't think any of the obvious choices,

quite make the mark.

Exclamation marks are one way (as in English), and often a っ before an exclamation mark can give the effect of increased volume. They can even be repeated or put into katakana for more emphasis.

Japanese writing also seems to have less rigor in its literature-writing rules than English, so you can probably get away with repeating letters (黙れェェェ！), using multiple exclamation points, etc., without being frowned upon too much by literati. At least that's true for light novels and games.

There are also emphasis dots as istrasci mentioned. I think these are probably enough tools to create a powerful effect if desired.

Capitalizing all letters to convey the meaning of shouting is rather used in the internet than books but here's what I found in the Japanese translation of the Harry Potter first book (Japanese title 「ハリー・ポッターと賢者の石」). I hope this can be helpful anyway.

Look at the first row, the shouted part is rendered in bold and a larger font size. This is used consistently throughout the book. 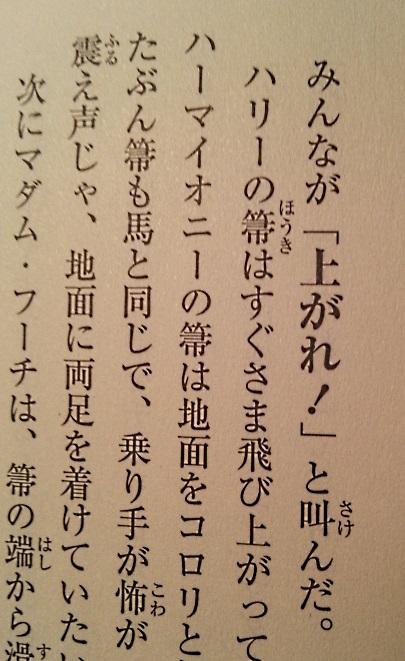 It's worth noting that until about 20 years ago, capital letters did not always connote shouting in English either; in earlier decades, they rather implied importance or formality (their straighter lines were easier to carve into stone, and so they were once always used for monuments, hence the term "capital"). It was quite common to see all-capital texts from government or legal sources, and you can still find all-capital sections in legal agreements to denote emphasis. The denotation of capital letters as a method for shouting grew up along with the Internet, along with many other conventions for restoring some of the flavor of spoken language to a pure-text medium.

There are plenty of other ways to show shouting in Japanese. Size, font weight, and exclamation points handle the job very well, and of course you can just add auxiliary text to say that a character was shouting. On the Internet, you can add additional emotion by emoticons: (ノಠ益ಠ)ノ彡┻━┻ or (」゜ロ゜)」 can denote anger or despair, for example. Manga adds a lot of additional conventions, such as gigantic, page-filling letters, jagged type, angled snipes around the letters, enormous mouths, etc.

Capital letters, however, are not one of the options, since there aren't any.

Not the answer you're looking for? Browse other questions tagged katakana orthography .

3
How would I indicate yelling when writing Japanese?

17
About writing numbers using Japanese numerals vs using Arabic numerals
2
How would you write the name Anibal in Japanese?
3
Why would one use 当て字?
1
Why would the Japanese transliteration from Greek Χριστος be spelled as ハリストス instead of キリストス?
7
Katakana loanwords: is there data about their creation/evolution and acceptance as "new Japanese words"?
12
How would you translate this? バタコチーズライス