On the two words, several pronunciations, and many spellings for "sake cup"

When I was in Okinawa drinking sake I asked my host what the Japanese word for the sake cup was and was told:

Then today I went to the Nezu Museum in Tokyo which currently has a collection of sake utensils on display. Every single cup there bore the label:

So I was originally going to ask what the difference is between おちょこ and さかづき but on looking up the latter for the right kanji to use in this question I was bombarded with these variants:

What am I to make of all this? Which word should I use for sake cup? Why would the museum go with an uncommon variant? Are there nuances?

I think さかずき normally refers to something that looks like this: 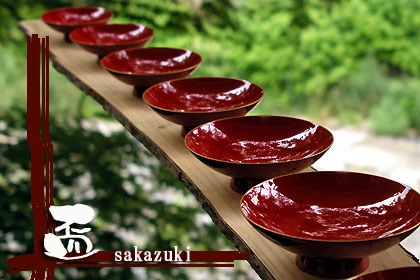 and can also be used as a general term for sake cup, including おちょこ: 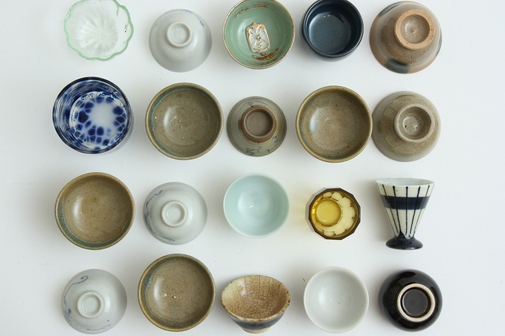 I think さかづき is probably an archaic way of spelling it in hiragana(or katakana?). Nowadays we normally spell it as さかずき. As for 杯 and 盃... both look okay to me, though I think I learned it as 杯 at school... some people say 盃 is a 俗字(informal variant?) for 杯 but I'm not sure.

Well, to start off, お猪口 is the typical cup you see when sake is served hot. It looks kind of like a ceramic shot glass, just with straighter sides and a little shorter.

さかずき are flatter and disc-like. As for how to write it, my dictionary confirms the preferences listed in EDICT: 杯 is listed first, followed by 盃. Unless I go to the 国語辞典 within the application, it leaves off the other two. Given the fact that the latter is a 人名用 and the former is 常用, that would appear to indicate that 杯 is the way to go, however Wikipedia (and, in fact, the displays you've been reading) appear to prefer 盃.

Not the answer you're looking for? Browse other questions tagged word-choice pronunciation spelling kanji-choice .

18
Differences between the many words for dinner
10
Difference between the many words for son and daughter
5
Are 清酒{せいしゅ} and 日本酒{にほんしゅ} two words for the same thing?
11
On "おてもと" and its many variants for "chopsticks"
7
Are グラス and ガラス alternative spellings of the same word?
2
How do you say "pair" of people?
2
Is it common for Kanjis to have several pronunciations like for 乾?
1
Writing conventions / pronunciations for words with っ
5
日曜日，the different meanings and pronunciations of 日
2
噓憑き: what is it and how is it different from 嘘つき?