In the finale of a drama called お天気お姉さん, around 8:26 in, I saw this subtitle:

But the pronunciation of 一ヶ月前 sounded either like いっかつまえ or いっかすまえ to me, with no sign whatsoever of げ. The two speakers in the dialogue are male and both have pronounced that word the same way. One final detail I can add is that I've noticed quite a bit of 関西弁 spoken in this. Is this slang? A regional dialect? I can't find any info about this kind of contraction.

@rintaun and I determined that this quote is from the finale of a drama called お天気お姉さん, around 8 minutes 26 seconds in. We both listened to it and heard the /g/, though I'd describe it as "swallowed", while rintaun described it as "slightly elided, but it's there".

We both thought it sounded like the velar nasal allophone of /g/ which is pronounced [ŋ], very much like the <ng> sound in English sing. What might make it hard to catch is that unlike the other Japanese pronunciation of /g/, this one doesn't actually stop the airflow, it just makes it go briefly through the nose.

The nasal /g/ appears more often in Eastern dialects, not Western. The actor who plays 天川 is named 北村 有起哉 (きたむら ゆきや) and according to his official website is from Tokyo, so it makes sense that he'd have that pronunciation of /g/.

To add to the previous answer, I was thinking we might be imagining sounds sometimes that may no be there to fit our concept of the word. So I took a look at the spectrum of 一ヶ月前: 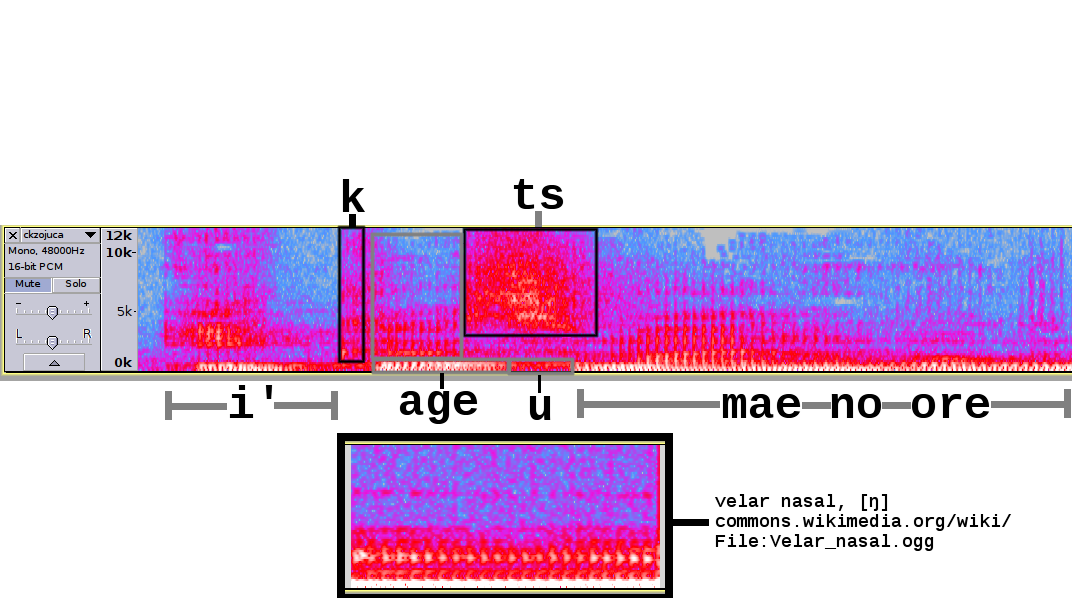 I have included the spectrum of the velar nasal ng (ŋ) for comparison. Observe that you can see this pattern in the middle of the age sound. It is short and faint, but the sound is there.

We can also see devoicing for the つ syllable. Note that the u quite faint. (Blue represents low, red higher and white the highest intensity in the spectrogram above.)

(Anybody who has got more experience at analyzing spectrograms, feel free to edit this post.)