Haphazard usage of katakana and hiragana for particles and okurigana

I'm looking at this picture of the 日米和親条約 (Kanagawa convention) from the late Edo period and it seems rather strange: 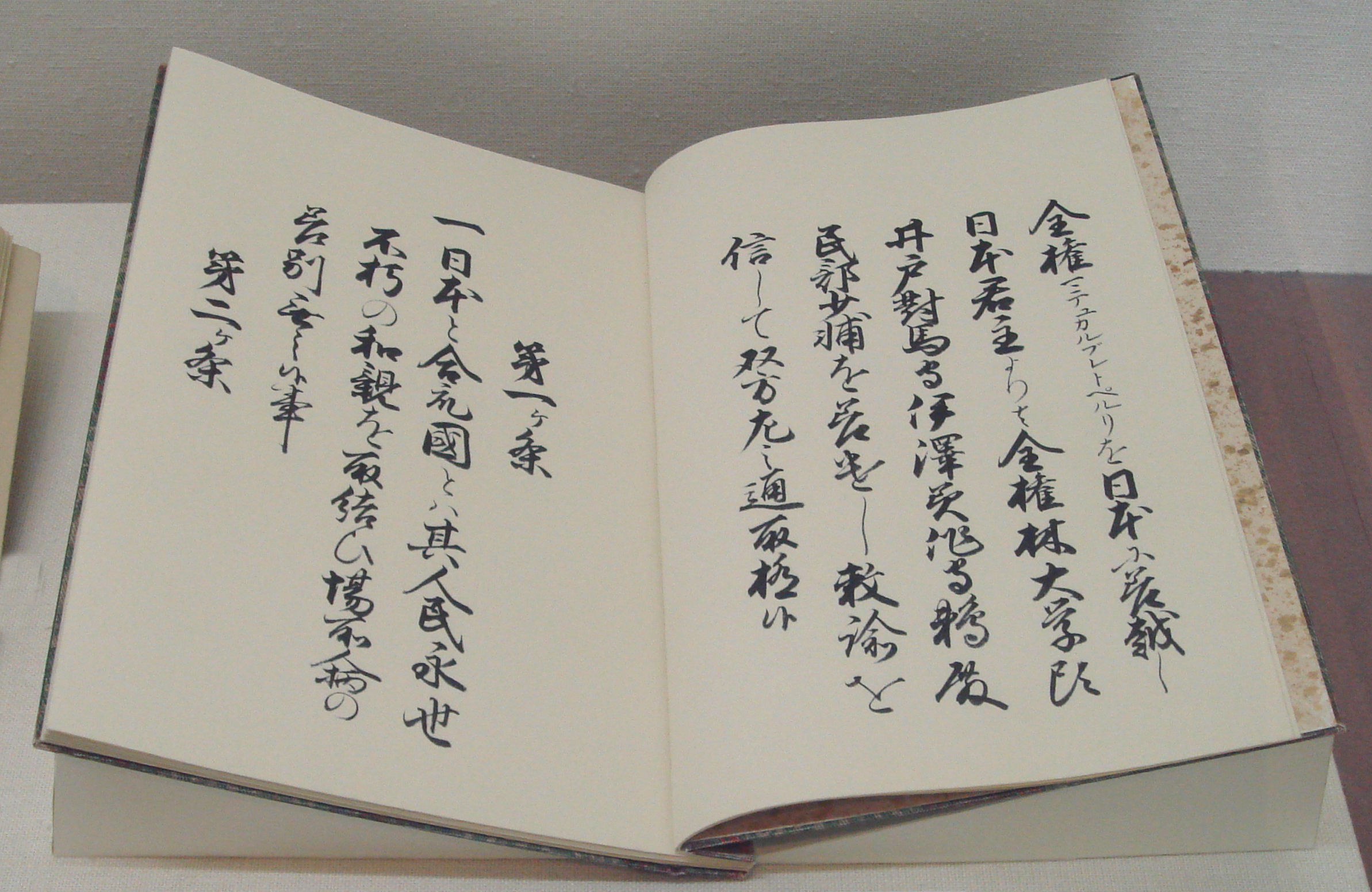 Is there some sort of rules behind this, or is it just stylistic choices by the person in question? It does seem that Japanese orthography wasn't really standardized until the Meiji period (in which official documents seem to be written in a weird constrained Classical Japanese with 濁点 omitted, but I'll ask that as another question), but this random usage of katakana and hiragana, well I've haven't seen it before. I thought a text usually used either katakana or hiragana for its non-kanji parts.

Using ハ for particle "wa" was a part of their proper style to write official documents or letters at that time.

The handwritten characters in black are of the actual document, and each of the red characters represents the [楷書]{かい・しょ} of the black character alongside it. In the bottom part starting with (中略), there are a couple of ハ characters such as

They are all particle "wa".

You may find ハヽ in the document. ハヽ means ハバ in this case and is read "waba" which is composed of the okurigana "wa" of 候 and a particle "ba". This combination is also almost always written ハヽ. はゝ is almost never used for this kind of "waba" in 候文.

Using ハ for particle "wa" was very common not only in formal documents or letters, but also in various kinds of writings during the Edo period.

Actually, using ハ for particle "wa" was already common in the Heian period. So we can see them used in Emakimono such as Genji Monogatari Emaki (源氏物語絵巻) etc. But this answer focuses on the usage of ハ in the Edo period, because 日米和親条約 was concluded in the Edo period.

ハ or は of Preference

These are customary rules. So actually, particle "wa"s written with は exist, especially in informal writings of the Edo period, but it's very rare.

Here is an example of a replaceable kind of ハ.

In the right page, there is the title of the book like this.

The last character of the furigana([振]{ふ}り[仮名]{がな}) is ハ here. Then, please look at the last page of the same book.

In the right page, the last line is like this.

童 is written ワらハ in the first page, but ワらは in the last page. (Both of them are read "warawa.") The ハ and the は are probably written according to the author's preference. And it seems acceptable for Edo-period readers, because this kind of ハ／は is found in many books written in the Edo period.

So, replaceable kinds of ハ existed, but a particle wa was not one of them.

Is the ハ Hiragana Or Katakana?

So it's possible that Edo-period people categorized ハ as katakana but still used it in hiragana contexts, although it's also possible that ハ used in the Edo period was thought hiragana and had a similar shape to katakana ハ like the modern standard hiragana へ and katakana ヘ.

Anyway, the ハ is kana. And today, it's categorized as hentaigana.

If you are interested in how textbooks, published in the Edo period, are like, here is an example.

This image shows a part of a textbook for children, published in 1852([嘉永]{か・えい}[五年]{ご・ねん}). On the left page, there is a chart of katakana which contains ハ. Then, please look at the next page of it.

On the right page of the Image 21, there is the iroha poem (いろは[歌]{うた}) written in hiragana, which contains は. (The iroha poem was commonly used to learn kana.) The first two lines are like this.

Then, in the same page, please look at the inside of the box which contains a mountain landscape. The box also contains the iroha poem written in a proper practical style using kanji. The first line says

This teaches that は of いろは should be replaced by ハ when written in a proper way. This ハ is a particle "wa." I don't know if the author means the ハ is katakana or a variant of hiragana は, but anyway, he teaches that ハ is the appropriate character to use for a particle wa.

Edo-period children learned written Japanese with textbooks like this.

The document follows consistent rules, if you look at it more closely.

Firstly, the document itself is actually highly cursive, both in its kanji and hiragana. After this time and up until 1945, it became standard for treaties and formal documents to be written exclusively in kanji and katakana. The fact that this uses hiragana is a result of its cursive style.

But, as we can see, katakana is used to write the foreign name Matthew Calbraith Perry, as katakana is the only standard script for writing foreign names, even in the otherwise cursive script of the document.

Some of the characters that look like katakana, such as ハ, are actually hentaigana, as @marasai points out, referencing this list. In fact, if you reference all the documents here (courtesy of @viven), all of which are cursive, all characters used are perfectly valid hentaigana. Some look like katakana, but are actually consistently hiragana throughout the document, but are simply historical variant hiragana that have since become nonstandard. Hiragana was only standardized in 1900 (this document is from 1854), making these historical variants understandable. 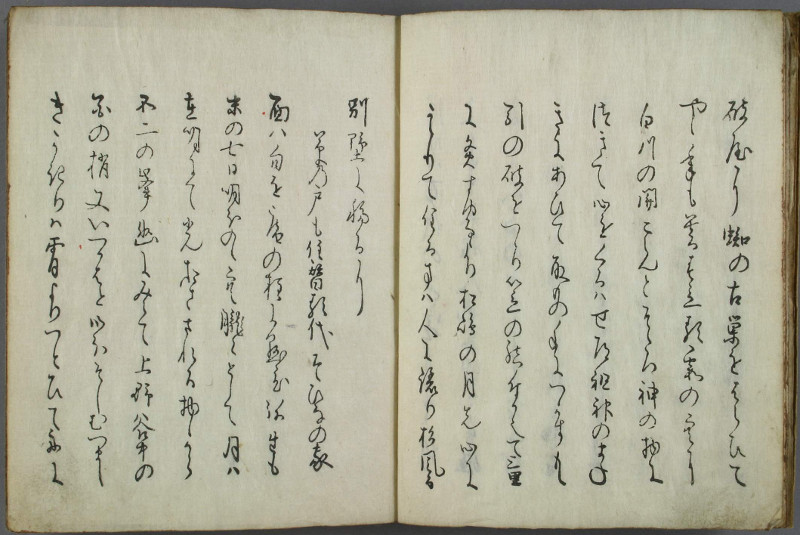 Note that all the kana are hiragana/hentaigana. We see the hentaigana ハ appear again on both pages

As mentioned, the sole exception to this is when writing a foreigner's name, which has always been standard to write in katakana throughout history, even in cursive documents.

The document isn't haphazard persay, but rather uses a very cursive style, meaning that all kanji are cursive, and all kana are hiragana (including variant hentaigana) except for foreign names. Its style is totally consistent in this regard, just different to modern Japanese usage, particularly of hiragana/hentaigana forms.

Not the answer you're looking for? Browse other questions tagged history orthography kana classical-japanese handwriting .

40
Why was both katakana and hiragana created?
7
Was the の particle sometimes written in katakana?
8
Was "The Tale of Genji" really written completely or almost completely in hiragana?
2
For furigana, can katakana be used instead of hiragana?
15
How has Japanese kanji and kana usage changed since 1945?
7
Academic/historic attempts to create an alternative writing system similar to Hangul?
5
After a Katakana word then "tto" are both Hiragana or Katakana acceptable for the Sokuon?