What are these suggestions in hiragana typing?

What are these in hiragana typing when I want to type wa? 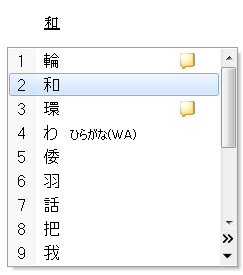 Well, only one is a hiragana, namely わ. It even says so next to it (ひらがな), but written in hiragana.

There is only one way forward for you: learn hiragana.

The cursive-like appearance itself gives it practically away, but if you're interested in learning Japanese, learning hiragana is the best starting point.

The other suggestions in the list are kanji, which (among other groups of characters) you need to write Japanese.

These are simply the choices Word gives when "wa" is input using the keyboard; The desired character is marked by using the space bar to scroll the options, and when the desired choice is highlighted, hitting Enter selects it for the text.

Japanese input methods on computers rely on the phonetic entry of text using the latin alphabet. The patterns which are entered are matched in a dictionary, which provides possible completions for the unit which was typed. More than one words or word fragments correspond to "WA", and are written using different kanji. The "WA" you have highlighted, 和, has the meaning of "peace", "harmony" and in the Japanese language it also denotes "Japan" or "Japanese way". It is found in compounds like 和服 (wafuku): Japanese style traditional clothing (as opposed to 洋服 (youfuku) which is Western clothing), or 和紙 (washi) which is traditional Japanese paper. Another very familiar "WA" which I see there is 話, which means "talk", and is part of compounds like 電話 (denwa): telephone.

When you're trying to write, just ignore the completions that you don't understand. If you know that what you're trying to write is written using certain characters, then you can choose that spelling. Otherwise, just choose the hiragana. Using the incorrect kanji is worse than spelling it out with hiragana. For instance but suppose you wrote "denwa" as 電和. This misspelling is more confusing to readers than でんわ. (No properly developed IME would offer such a misspelling as a choice for "denwa", but it's possible to type "den" and "wa" separately and choose those characters individually.)

Not the answer you're looking for? Browse other questions tagged words hiragana or ask your own question.

8
Why are a high proportion of basic Japanese words written in hiragana?
16
Why do some Japanese people write parts of their name in hiragana?
4
How to read kanji when they are written together with hiragana or katakana in a sentence?
1
Write the reading of the following kanji in hiragana!
1
What is used more in Japan for numbers? Kanji or Hiragana?