Is there a way of typing Japanese characters when you have no knowledge of the language? I've cut and pasted from Japanese websites before and used translation websites from English to Japanese with no trouble. I'm just wondering how I can search for what the text is from a t-shirt I have.

I've had this t-shirt for a while now and wear it a fair bit. I'm just wondering what I'm saying to people who can read it as I go about my business. If you can answer my above question or simply translate it for me that would be great - I understand it may mean I'll never wear it again, however! 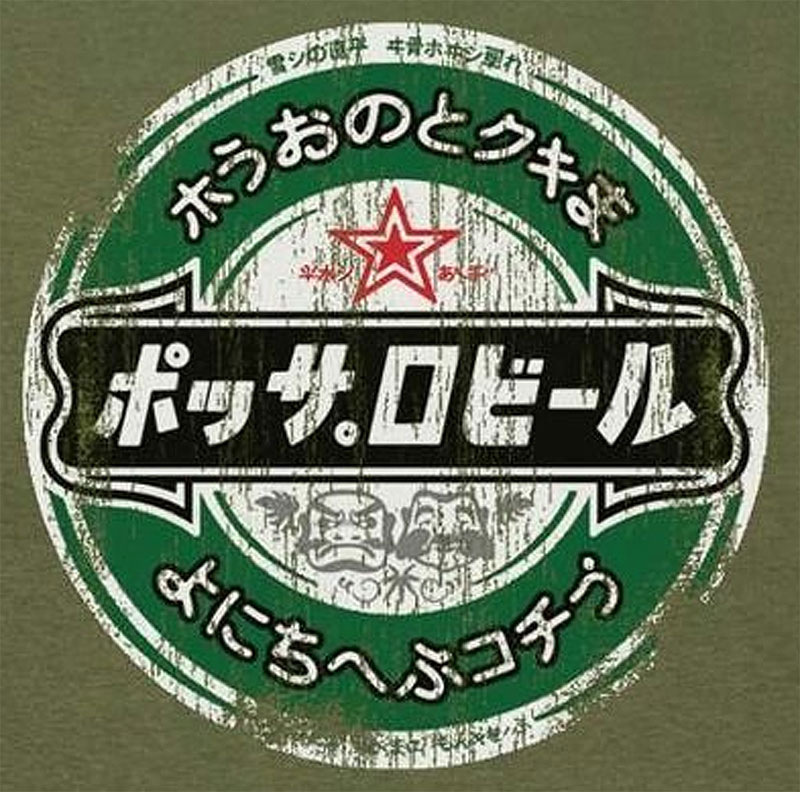 From what I can gather, this shirt appears to be made somewhere other than in Japan, as the top and bottom line of characters mean nothing intelligible (unless you start making up your own meanings for each section of the random list of characters.)

The middle line is closer to something that makes sense, and it almost reads: Sapporo Beer. (But the characters are slightly out of order, and there is a random period next to one of the characters.)

This might be a parody T-shirt... where the characters are switched just enough in order to avoid legal problems from an actual brand (Sapporo Beer mixed with Heineken, in this case.) It would be interesting to know where this shirt was found... (perhaps Thailand?) 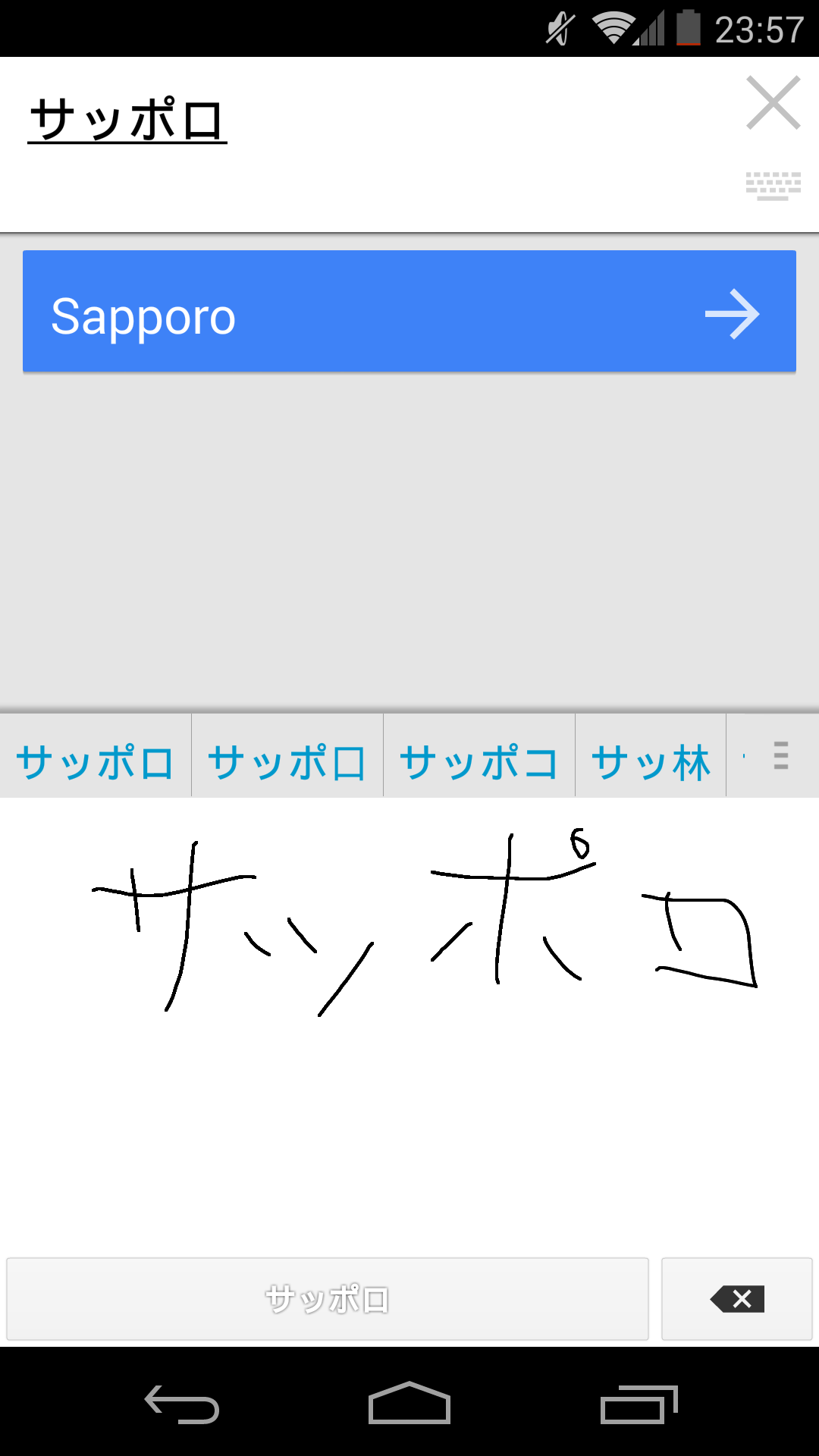 I would just use Google Translate on a smartphone with a touch screen. It's pretty accurate.

Edit: Guys, I don't get the downvotes. The question was

Is there a way of typing Japanese characters when you have no knowledge of the language?

And I say: Yes indeed, you can just draw whatever character(s) you see in the drawing box. サッポロ is just an example to show that you can draw multiple characters next to each other and it will be recognized. Besides, the characters for サッポロ show up on the T-shirt.

I could have drawn anything, for example 鬱. The correct stroke order is not important either.

I've actually got two methods I use, depending on if I'm using my phone or laptop.

This method is used in several places—the most notable ones I've seen it in include NJStar's built-in kanji dictionary and Jim Breen's KANJIDIC search on the Monash University website. I primarily use it for looking up characters I don't know when I'm on my phone, using an app formerly called Kotoba! (which, for some stupid reason, later decided to change its name to "i-mi-wa?").

As the name implies, this method is pretty straightforward. You're presented a table with the 214 Kang Xi radicals (and, often, several variants of certain ones). Whereas a traditional dictionary would require you to look up by the official radical for a character, these dictionaries have indexed all the kanji so that any radical that appears as a component in the character can be selected; hence you can build the character from the elements you can identify and then select from there. More advanced implementations even let you filter by the stroke count of the character you're searching for to help eliminate junk results.

On my laptop, Apple's Kotoeri IME has an awesome feature built in where you can type a character and then find similar ones from there by selecting it and hitting either Ctrl+1 ("Convert to Related Character") or Ctrl+2 ("Search Similar Kanji").

So, for example, if I type in 照 and hit Ctrl+1 (Related Characters), it offers me the following:

In this case, a very obscure character which, according to EDICT, is an 異体字 for 照, and therefore has all the same readings.

If we try 人, we get something else rather interesting:

Instead of variant characters, per se, it produces the standalone radical forms (にんべん, ひとやね, etc.). This combines with the next trick (Ctrl+2 = "Search Similar Kanji") to make looking up obscure characters a breeze at times.

The great thing about the Search Similar Kanji function is that it doesn't have to search based on just one character at a time—you can select several at once and it will attempt to find a character that combines them.

So, let's say that I'm a beginning Japanese student, and saw the character 他, but didn't know how to write it. I do know 地, however. What I can do then is do a search similar on 地, which offers the following:

Fourth character in the list I spot 也, which happens to be the element I'm looking for. Using the trick above to get 亻, I then select both and have it do a search based on 亻也, which produces:

As you can see, the obvious option came out on top, and then it tries other less-obvious ones from there. Also of note is that it does allow you to use katakana as part of a search (e.g. リ instead of 刂).

Admittedly, at times it can feel like it gets hooked on the part you're not interested in (it tends to prioritize variants based on the same radical first before offering the other parts of a character separately), however with a little bit of patience it's very rare to find a character that this system won't handle.

In addition to what other people have mentioned, there is another technique that can sometimes be useful for this sort of thing, if you have an Android device which supports it.

The Google Lens application will allow you to point your camera at anything with written text (in all kinds of languages), and will attempt to identify and isolate the pieces of text in the image, and allow you to select them by tapping on them. The idea is that you could then use Google Translate on them (which is not always going to give you the best results, IMHO), but you don't have to do that. You can also just copy it to your clipboard and then paste it into other things as well.

Obviously, how well this works can depend on a lot of factors, such as the quality of the image (there might be some issues with this shirt considering how worn some parts of it are, for example), the font used, and so forth. If I remember correctly, Google Lens is not supported on all devices either (it requires some particular hardware acceleration features, I believe). If it does work, it may still not actually get everything, and it might get some characters wrong, but if nothing else it can give you a good start to work with which can then be filled in or fixed up by some of the other methods people have mentioned.

8
Does バラの寝床 come directly from the English expression "bed of roses"?
4
Trouble understanding "また何処かで会えると 素敵ですね"
3
身にまとう related question
1
How to construct a name for fictional Kami?
3
How to translate "early for tomorrow"
2
How does this Japanese sentence differ from this "official" English translation (ついでに体も繋がっちゃう)?
0
So I'm trying to understand this paragraph of the 365 Nichi no Kamihikouki song text
2
Meaning of に起こす