Why censor this one kanji?

I was watching an old Saturday Night Live sketch from the 1970s, called Night of the Moonies, making fun of the Unification Church by putting them in the context of the movie Night of the Living Dead.

The video I was watching happened to have Japanese subtitles. I noticed that in the subtitles, when they referred to the Unification Church, which is called 統一{とういつ}教会{きょうかい} in Japanese, they replaced 一 with ◯, so it looks like 統◯教会.

My understanding of the use of ◯ is that it is the equivalent of when in English words are blacked out, to censor them so as not to offend. But I'm a little baffled by this instance of censorship, or even if that's what it is. 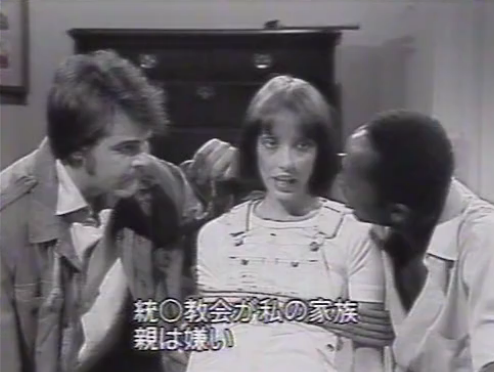 "The Unification Church is my family. I don't like my parents."

Why censor the name of the church? Why block out only one of the kanji?

You are right that ◯ is used here to mask a letter.

There are several related but different reasons as to why one would do this. The comment section already refers to one such use, where certain words are deemed inappropriate (especially on broadcasting), the equivalent of f*ck. But I don't think that explains this one.

In this case, I think the intention is to poke fun at 統一教会 in several ways.

First, by disgracing their name, by implying that it needs masking, as in the same league of f*ck and such. It also implies that the content refers to them in a negative way, which would actually make it more attractive to certain audience (who despise them.)

And finally, because the masking in this case doesn't really mask anything, for those who do not see 統一教会 nagatively, this sends a signal that they should.

(Perhaps you aren't aware of the controversies surrounding 統一教会, and if so, reading upon it a bit might make it easier to understand this.)

It's to ward off potential legal issues. The idea is that if you use a brand name or real name of an organization they could claim a trademark or that the sketch was about them or whatever. Changing one letter is a kind of fig leaf.

It can also be done as a kind of joke, where the author is acknowledging that what they are saying is somewhat questionable or might anger the owner of the mark.

I think they are just trying to not offend a particular denomination, though it's pretty obvious which one they are talking about.

Not the answer you're looking for? Browse other questions tagged usage kanji or ask your own question.

45
What do the shapes △ ◯ ╳ ◻ mean in Japanese? And are there variations in meaning, depending on whether or not the shape is filled?
17
What is the meaning of 金〇
7
What does 〇〇〇〇 mean when combined with おじさん？
3
I want to know what "marumaru" means
3
う◯こ versus う◯ち - which is more childish?

2
Can't find this kanji
3
Why would one write 譬｛たと｝える this way?
2
what is this kanji? why is it used?
0
Onyomi words consisting of just one kanji (and nothing else)
8
Can an individual Kanji character have more than one radical?
1
一 (one) kanji onyomi pronunciations
2
Why does this kanji use "sora" as its reading?
25
Why is 私 a sixth grade kanji?
0
Help me understand this kanji