WWWJDIC says that both Ŕ┐Ěň«« and Ŕ┐ĚŔĚ» mean "maze / labyrinth".

Google Images suggests that they are about the same thing: link1, link2

However, what may be the differences in nuance and usage between Ŕ┐Ěň«« and Ŕ┐ĚŔĚ»?

The "correct" translation for Ŕ┐Ěň«« is indeed "labyrinth" in the sense of the structure from ancient times, and it's basically from here that you get the real "differences" outside of medical terminology, etc. If you look on wikipedia there is a whole section devoted to the qualities that make a Ŕ┐Ěň«« different from a Ŕ┐ĚŔĚ». It might be an overly technical distinction, but here is the relevant part:

So in a Ŕ┐Ěň««, if I may briefly translate:

This explanation deals with Ŕ┐Ěň«« as a strict translation of the term "labyrinth," while Ŕ┐ĚŔĚ» is generally a maze. You can see a Ŕ┐Ěň«« as a special case of a Ŕ┐ĚŔĚ» that follows the above rules. Like English, however, we don't really use labyrinth with such strict rules, and the same is true in Japanese. For example if you go through a dungeon in an RPG that happens to be called Ŕ┐Ěň«« it likely won't follow these rules. In fact a good alternate translation for Ŕ┐Ěň«« may very well be "dungeon" in the video game sense, since I have a feeling that outside of describing "actual" labyrinths it gets most of its usage from games. The key to note is that a Ŕ┐Ěň«« is primarily a structure with a spooky atmosphere designed to be complicated and keep people out (or in?) while a Ŕ┐ĚŔĚ», like snailplane mentions, is just a maze, a tricky path or a game you played on paper as a kid. There are different connotations to Ŕ┐ĚŔĚ» and Ŕ┐Ěň«« like this in Japanese just as there are connotations between labyrinth and maze in English.

For the record, this is what wikipedia technically describes as a Ŕ┐Ěň«« 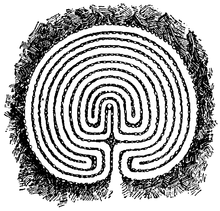 Not the answer you're looking for? Browse other questions tagged usage nuances synonyms or ask your own question.