へ or に particle for 曲がる?

i was wondering what may be the difference in nuance between 右へ曲がる and 右に曲がる ?

Example: Take a right turn and you'll see the library.

Does this work the same way for 右[へ・に]曲がる? (Since 右 is the direction itself and not a location?)

Or is it true that we can treat 右 and 左 as locations themselves and we can say 右へ行く and 左へ行く?

In fact if we say "Turn to the right (standing on the spot) and you will see the painting." there isn't even any direction nor location at all is it?

In English terms, when saying 左{ひだり}に曲{ま}がる you're saying "turn to the left", and when you say 左{ひだり}へ曲{ま}がる, you're simply saying, "turn left."

Which, as Troyen pointed out in his comment, is still a little vague because the difference in English is also subtle. So much so that I have to concede that there is a fair amount of individual perception here on what the English terms mean, and the Japanese may also have a degree of overlap.

Which means that native speakers might have different assumptions about the subtleties, but, on the upside, you can probably interchange the terms to some degree and will most likely be understood.

Having given all that qualification, I believe the two terms can be looked at this way: 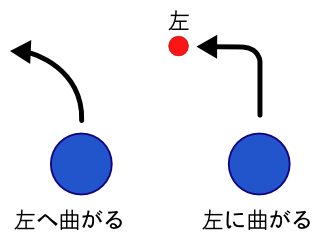 In the case of に, there is a conceptual point up ahead which one turns to, designated "the left". Critical to note, though, is that it is not the destination. Think of it like being in a car and telling the driver to turn to the left at an intersection. You can not begin turning until the intersection, and you are not going to stop at the intersection either.

In the case of へ, there is no conceptual point which defines the point of turning, one is simply going to turn. Imagine being on the open water in a boat, and if you wanted to turn left, you would simply begin doing so. (Though you should tell the captain you want to turn 左舷{さげん}("port") because, for reasons I've never understood, nautical people have different words for left and right.)

Just for clarity and comparison, note how 左{ひだり}へ曲{ま}がる is different from 左{ひだり}へ向{むか}う. 向{むか}う would mean to turn on your axis, to face left, regardless of your forward momentum. 曲{ま}がる, which also means "twist" or "bend", is referring to the course ahead of you, and not turning on an axis.

I think it's not much different than the other threads (to which I will not link). I would say it's nothing more than 右に being "turn right" and 右へ being "turn to the right" or "turn right-ish".

Not the answer you're looking for? Browse other questions tagged grammar particles nuances particle-に particle-へ or ask your own question.